The struggle to figure out a way to pay for road and bridge repairs isn't just a Michigan story. 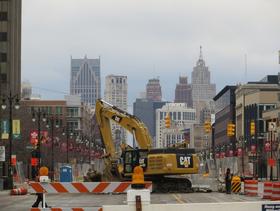 It's happening on the federal level as well.

The Obama administration is sending a six-year, $478 billion highway bill to Congress, where it faces a dubious reception.

Todd Spangler, a reporter for the Detroit Free Press in Washington, says the Highway Trust Fund would reap the most benefit from this bill. It’s this fund that states rely on for many different kinds of projects involving highways and bridges.

He says Michigan currently receives about $1  billion from this fund. Should the bill pass, however, that number would increase to about $1.25 billion.

However, the fate of this bill does not look good.

“This proposal from the administration is unlikely to go anywhere,” Spangler says. “The fund itself will lose its authorization at the end of May.” There's enough money in the fund to last until September or October. and Spangler predicts Congress will approve a short-term extension.

Meanwhile, state transportation officials are getting ready for construction to halt, just in case the money indeed does run out.

“States across the country rely heavily on the money they get from the trust fund and that’s why, realistically speaking, it’s not going to shut down,” Spangler says. “At the very least, Congress will pass another short-term thing. But whether or not that actually lets states move ahead with larger projects and planning the out-years is a real problem.”