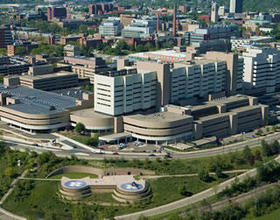 Congress has until the end of September to finalize a budget for the new fiscal year. The Trump Administration has proposed drastic cuts to science and research. While some in Congress are calling for spending increases.

The scientific community is sounding clear warnings about what curbing research funding would mean for the United States. A new analysis by University of Michigan researchers finds the U.S. would lose its top spot as a contributor to science research. Meanwhile, a huge competitor is ready to leap ahead: China.

Dr. Bishr Omary is the chief scientific officer at Michigan Medicine and the senior author of the study. He says his team looked at peer-reviewed journals, and what countries studies published in those journals came from in specific years. He says from 2000 to 2015, the U.S. published fewer studies in so-called “high-impact” journals, while China is climbing up the ranks in terms of the number of studies it publishes compared to other countries.

“China has been able to encourage their [researchers] somehow, and create the environment that allows research to be published in these high-impact journals, whether it's clinical or whether it's basic science research,” Omary said.

Omary says while his study looks at a relatively small sample of journals, it's a thorough analysis. He says his research team considered every single study published in the journals during the selected years.

Omary says proposals to cut funding for research could have a chilling effect on young people considering careers in science.

“They’re looking at their mentors and teachers who seem to be struggling because they have to spend a lot of time writing grants as opposed to doing research,” Omary said.

Listen to the entire conversation with Dr. Bishr Omary, above.