For small towns in Michigan, live theater can build community and bring in dollars

The town of Williamston, in Ingham County, has a population just under four thousand people. Like many Michigan towns of its size, its downtown historic district boasts a variety of retail and dining establishments. 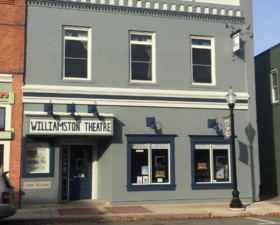 But nestled among the brick storefronts is a somewhat less-familiar sight: an 88-seat black box theater.

Founded in 2004, the Williamston Theatre is now in its eleventh season. During that time, it has won numerous awards, including four Thespies for Outside Mullingar during the 2014-2015 season. It has also become an increasingly important driver of economic development in Williamston.

Tony Caselli is the director of the theater and one of its four original founders. He told us Williamston Theatre typically brings more than 10,000 visitors to the town during the course of a season.

Those visits have spill-over effects. Mario Ortega, Williamston's community development director, said the town’s business district has been thriving since the theater opened.

“It’s evolved more into creating a sense of place,” Ortega said. “Williamston has been around for a long time, and so it has developed as mainly a retail center… With the theater we’ve seen a larger bump in the restaurants we’ve had.”

The theater’s next production also promises to be a big draw. Beginning on March 23 and running through April 23, they will be presenting an adaptation of George Orwell’s 1984.

Listen to our full interview with Tony Caselli and Mario Ortega above.