Related Program:
Stateside
ShareTweetEmail
Listen
Listening...
/
Stateside's conversation with Robert White, the parent of two adult sons who are on the autism spectrum and Gail Marsh, the mother of an adult woman who has Down Syndrome.

Major changes could be coming tomorrow in the services for people living with a mental illness or a developmental disability in Michigan.

Tomorrow, state lawmakers are expected to release their final budget for fiscal year 2017-18 for the Department of Health and Human Services.

That budget will reveal if Republicans have chosen to shift control of mental health funding – which amounts to nearly $2.5 billion in annual Medicaid payments – away from public mental health organizations, and transfer it to private insurers.

For more than a year, there have been many, many discussions about this. The state convened what's called the Section 298 Workgroup to come up with recommendations for the legislature. So-called Affinity Groups were also held across the state to hear the ideas and concerns from consumers and their families. 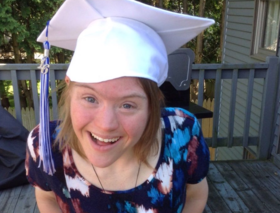 For parents of children with disabilities, this is a deeply personal issue. Many of them, like Bob White and Gail Marsh, work hard to advocate on their children's behalf so that they can get the mental health services they need to lead healthy, happy and productive lives. They both joined Stateside to talk about their struggles and successes with the state's mental health care system and why they are worried about the prospect of changing the system their children rely on.

White is the father of two sons who are on the autism spectrum and he lives in Clarkston, and Marsh is the mother of an adult daughter who has Down Syndrome and she's from Grand Rapids. 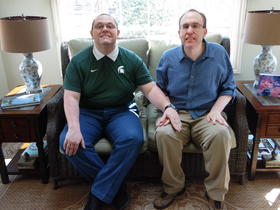 For White, this has been an issue close to his heart for more than four decades. His oldest son, Fred, is 46 years old, and his younger brother Michael is 32. The White family has experienced Michigan's mental health system before there was widespread care available. According to White, when Fred was diagnosed with autism 43 years ago, there was no "playbook" for parents to follow.

Fred has lived in a small group home for the last 16 years, while Michael currently lives in an "independent supported" apartment and has a job.

Marsh's daughter Kayla is 27, and has been involved in Michigan's mental health care system for nine years. When Kayla turned 22, her independent spirit drove her to move out of her parents' home to start on her own path, like many young adults do. She currently lives in a shared housing arrangement that is paid for by Medicaid and Marsh has watched as Kayla has exceeded her expectations of living on her own. "Wildly successful" is how she described it.

Robert has been lobbying for mental health care on behalf of his son and many others like him and he explained why he includes a picture of his two sons on the cover of every narrative that he submits to Lansing, Washington D.C., or even to local governments.

"I feel it's so critical to take the emphasis off of, in this case, a line item budget or a bell curve or an actuarial study, and put the focus back on the individuals who are going to be affected by any of the changes," White said.

White and Marsh both explained that they have been relatively happy with the care their respective children have received, but that no system is perfect. Marsh points out that in her experience, it's not very user friendly and it can be tough to navigate, but her main concern is that it is a public system.

"When we stray away from a public system, we're going to lose that public accountability and the transparency," Marsh said. "A private health plan is not subject to the Open Meetings Act and they're not subject to the Freedom of Information Act. So there is no public transparency and accountability. I don't know that Veridian or Molina or Priority Health would welcome me to sit in on a board meeting."

White echoed her concerns as he fears that the quest for profits could get in the way of quality health care for patients.

"When we talk about moving the [mental health care] system away from a public entity ... to managed health care organizations, I think of it, often, as a shift from stakeholders to shareholders," White said. "And what gets lost in shifting the emphasis of why an MCO, that now has responsibility, or an HMO, for behavioral health, why they exist. Do they exist for profitability? Or do they exist for the benefit of maximizing the services that not only our sons, and Gail's daughter and others, deserve, but it's their civil rights, human rights and constitutional rights. It's not an elective."

White said he is not afraid of change, he just wants his family, and other families like his to be a part of that change.

Parents want nothing more than to keep their children safe and happy. But for White and Marsh, the uncertain future of Michigan's mental health care system leaves them feeling anxious because they may not always be there to fight for them.

"My wife and I are afraid to die," White said while fighting back tears. "Every year, we as parents, we aren't going to be around to advocate on their behalf. To make the trips to Lansing, to go to the meetings. We have to come up with something that's more sustainable so that we have the confidence that when we're not here, that our two guys, Gail's daughter and others like them, are going to be taken care of."

Gail echoed those sentiments.
"I said that to the group of 135 persons at the Section 298 work group, I told them that myself and other families that I'm aware of, we have a confession, like Bob, are hoping that our sons and daughters don't live longer than we do because we can't trust that there's a system that's going to take care of them."

Listen to the full interview above to hear more about their children and how they rely on mental health services as well as Marsh's examples of how privatizing "doesn't work" and why White describes it as a form of "outsourcing."