"Legalize, regulate, and tax" – state lawmaker has an idea for road funding 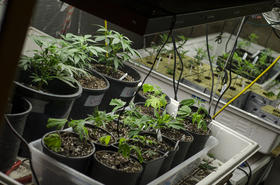 As state lawmakers search for ways to come up with the money needed to fix Michigan’s battered and bumpy roads, one state representative tossed out this idea: Legalize and tax marijuana, and then put that new revenue to work.

“And it has really left our state spending a lot of resources on law enforcement for something that I think that a growing number of people believe that is an improper use for the money that we have. And it has not allowed us to reap some of the benefits of legalizing, and I would add, heavily regulating and taxing marijuana so that we can raise revenue for some of these priorities.”

Dillon said legalization would not solve all of our problems, but it would raise significant revenue.

Dillon wrote an opinion piece in MLive arguing that decriminalizing marijuana and using the taxes it produces makes sense.

Regulating and taxing marijuana will never be a panacea for all the challenges our state faces. Taxes raised from regulating marijuana won't be enough to pay for all of our priorities. However, taking marijuana off the black market will generate much-needed revenue, allow us to redeploy law enforcement resources to focus on violent and property crime, and ease the tax burden on the middle class.

Dillon argues Colorado’s experiment shows promise. He says tax revenues are up, and violent crime and property crime are down.

“The data will drive you to the irrefutable conclusion that what we’re doing isn’t working, and that there is a better way, and that would be to legalize, regulate, and tax,” says Dillon.