How deep will AG investigation of MSU go? 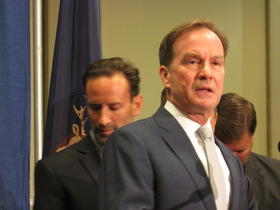 The special prosecutor's investigation has ordered the school to produce all emails and records for three close Nassar associates: his boss, former dean of the College of Osteopathic Medicine William Strampel; former women's gymnastics coach Kathie Klages; and Dr. Brooke Lemmen, a co-worker who thought of Nassar as her mentor.

Meantime, the attorney general did not take reporters' questions Saturday when he announced his investigation team.

How deep will the special investigation go?

“ESPN published this report that brought all the athletic department’s actions into a pretty stark light and asked some really serious questions around that. I wanted to know if the scope of the investigation was limited just to Larry Nassar — who knew what, when — or if it was broader than that, and the rest of Michigan State University should be on guard, too. The answer from the AG’s office was essentially the second one, he said, ‘no stone would go unturned,’ and his spokesperson said he meant it.”

Will individuals be held accountable?

“[In] a lot of the victim impact statements, people talked about notification to MSU coaches and other personnel, and [this] brought up the question of mandatory reporters — were any of these people legally obligated to pass along the allegations they’d received? I think as the whole picture comes into focus, people are really looking for individual people’s roles in this. Could one person have stopped this man?”

“The response from his spokesperson was that if there’s evidence of a crime committed by an individual, they will be charged. I think that puts everyone on notice. It doesn’t matter how small of a player you were in this. He said he’s focusing on who knew what, when, and ‘who’ could be everyone down to the smallest player.”