One of the rumors you can still hear about the incident is that the company must have dumped a surfactant into the Kalamazoo River to help break up the oil. The chemical is called corexit, and it can be harmful to humans.

Regulators and Enbridge deny corexit was ever used for the Kalamazoo spill. But that hasn’t put the rumor to rest.

The corexit rumor has roots in a lab report put out about a year and a half ago.

Robert Naman runs his own lab in Alabama. Some people in Michigan sent him samples of what they call "tar rocks" that they found in the river.

Corexit is on Naman’s radar because of his work during the BP oil spill.

“What the surfactant will do, is it will mix with the spilled oil and, like in the Gulf of Mexico with the BP spill, the surfactant made the material heavier than water,” he says.

But in the Kalamazoo spill, the heavy tar sands oil was already heavier than water. Much of the 800,000-plus gallons sank to the river bottom.

Naman says samples from the Kalamazoo had chemical markers for corexit, specifically 2-butoxyethanol. He says he has samples of the corexit mixed with oil from the BP spill to compare to the samples from Kalamazoo.

But you can find 2-butoxyethanol in the river from a number of sources.

“If we were talking about teeny, teeny, tiny amounts, you know, parts per billion, parts per trillion, that would make me think there’s a little bit there from motor boats or from people washing their boats and washing their pier off or whatever, that kind of thing," he says.

Naman says there are more than tiny amounts of 2-butoxyethanol in the river.

“There’s hundreds of micrograms per liter,” he says.

He gives me a lot of numbers. Big numbers. But I’m no chemist. I still can't see where in his report he's pointing to.

So I shared his report with several chemists. These chemists, they're not convinced.

“In the compound-specific analysis, I don’t see any evidence for butoxyethanol," Barcelona said last fall, looking over a copy of Naman's report.

At my request, Barcelona did his own analysis on six samples.

“In the 'tar rock' samples, we found some evidence for some low molecular weight alcohols that might have been misidentified by the lab in Alabama as 2-butoxyethanol,” Barcelona says. “Regardless, our analysis did not coincide with theirs, their result. We didn’t see any evidence of 2-butoxyethanol. Zero.”

So I've got two contradicting reports. I convince my boss to spend some money to get our own tests done on the "tar rocks." 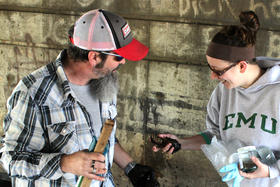 I give Craig Ritter a call. Ritter is the guy who started finding these weird rocks. He sent them to Alabama to get tested.

In April, we meet up not far from where the spill happened.

“There seems to be a lot of rocks, or strange formations, that have piled up here,” he says. “We’re going to head down here and see what we can get.”

The "tar rocks" we find are dark on the outside and break up really easily in your hand. Ritter and others claim they started showing up after the spill.

Tests haven’t proven much of anything about the rocks. Different samples are made up of different material. Nothing out of the ordinary, although tests prove these rocks have some residual oil in or on them.

Ritter and I fish a couple of the suspected tar rocks out of the river and I send the glass jars with the samples to a third lab that Michigan Radio hired.

The results came back a few weeks ago and there's no 2-butoxyethanol.

If Enbridge dumped corexit into the Kalamazoo River after the spill five years ago, I have no proof of it.