Electric bills could go up dramatically for people in the UP

Related Programs:
Morning Edition
All Things Considered
TweetShareGoogle+Email
Listen
Listening...
/
UP residents talk about their concerns about paying for the coal plant 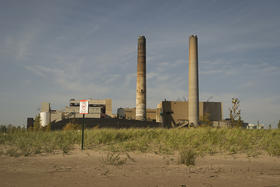 The cost of electricity could jump dramatically next month in the Upper Peninsula.

Residents there might have to start paying to keep a coal plant open that isn't entirely needed anymore. The increase will be a harsh blow to a region that struggles economically.

Brimley is a little town at the end of the road on Lake Superior’s south shore. There’s a bar, a casino and a couple motels. Brimley State Park draws campers here in the summer and into Ron Holden’s IGA grocery store.

"Basically the six weeks of summer pay for the rest of the year’s bills, " he says. On the wall of the IGA are deer heads, a black bear rug, and a flag that says, ‘American by choice, Yooper by da grace of God.’

But being a Yooper might cost more starting December 1. Holden expects his store’s electric bill will be $700 a month higher and he has no idea where he’ll get that money.

Holden’s monthly payments of $700 will help keep the Presque Isle Power Plant open. It’s about 150 miles away, near Marquette.

The plant does not provide power to Holden's grocery store or anyone in Brimley. The owners of the coal plant actually want to close it, but it is still needed to keep the transmission grid charged and reliable in the UP.

A complicated series of events

The trigger was when the plant's main customer, an iron ore company, switched to another utility — one from Illinois — to save money.

Now the question is, who pays to keep the plant open and electricity flowing in the UP?

Dan Dasho says UP residents can’t afford it alone. He runs Cloverland Electric Cooperative based in Sault Ste. Marie and he's telling his members to write to their elected officials.

Cloverland has nothing to do with the Presque Isle plant, but Dasho’s been making lots of presentations lately. That’s because Cloverland will collect money from its members to keep the plant open.

Crisis could be mirrored in other parts of the country

The situation is particularly difficult in the Upper Peninsula because it’s remote and there are few people.

But Dasho says other parts of the U.S. will face similar problems in the future, because utilities will want to close old coals plants rather than upgrade them to meet new clean air standards.

That is why Earthjustice is involved. Attorney Tom Cmar says the situation in the UP would be less severe if there had been more coordinated planning.

Earthjustice wants renewable energy and efficiency to be significant parts of the solution. Cmar says the clean air standards date back to 1990 and the industry could have spent more time preparing to meet them rather than fighting them.

"As a result of that, there has been a willful failure on the part of the industry to think about what the world would look like once these outdated, expensive coal plants are finally retired," he says.

In the UP, that question has become urgent. The Federal Energy Regulatory Commission is reviewing the situation.

But without FERC action, UP residents and businesses will have to start ponying up millions of dollars a month while an answer is worked out.

A coal plant in Michigan's Upper Peninsula will not power homes and businesses below the Mackinac Bridge. Wolverine Power Cooperative announced today it is dropping a plan to invest in the Presque Isle Power Plant.

Wolverine Power supplies electricity to rural areas in lower Michigan through utilities like Cherryland Electric and Great Lakes Energy. Wolverine was planning to become a joint owner of the Presque Isle plant in Marquette. The coal plant is almost 40-years old and needs expensive upgrades.

Governor Rick Snyder’s administration says it will ask for a lot of flexibility to meet new federal clean air goals. The federal government wants to cut carbon emissions by 30 percent over 15 years.

Dan Wyant, director of the state Department of Environmental Quality, says the goal attainable if the federal government lets Michigan figure out how it’s going to get there.

Governor Rick Snyder says it’s time for state lawmakers to set new energy goals for Michigan. He says those goals should include burning less coal and increasing renewable energy production over the next decade.

Snyder outlined a broad set of goals for energy policy between now and 2025 during a roundtable Thursday in Detroit.