The costs and benefits of student loan debt 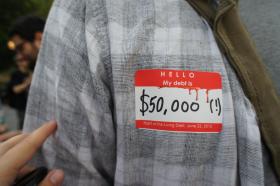 But should student debt get blamed for a wide range of economic troubles?

Beth Akers says maybe not. Akers is a fellow at the Brookings Institution's Brown Center on Education Policy.

In her article, Akers says there are a lot of narratives about how student loan debt is potentially creating a huge drag on economy through reduced consumption, depressed home ownership, and lower rates of entrepreneurship. But she says it's hard to back up that blame.

"My fear is that we really overstated the evidence we have to draw the conclusion that debt is dragging down the economy, and overlook the fact that debt is also a tool that's allowed people to obtain a lot more education than they would have otherwise," says Akers.

And what about the effect student loans can have on an individual?

Social scientists are just starting to look at causal relationships to understand how the college education and the debt are going to impact an individual's entire life.

But if you ask Shelley Manis, she'll tell you the psychological burden of a burden of long-term debts is huge.

Manis is in debt for her student loans to the tune of $180,000. After undergraduate school, she worked for several years in the publishing industry. But she felt like she wasn’t learning any more, so she pursued a masters in dramatic literature and then a Ph.D. in theater history.

"I think about money every single day, and multiple times a day. There are days I’m afraid to look at my bank account. There are days I think ahead I need to contact the fed loan people again and let them know I can’t do this and figure something out ... every day," says Manis.

Manis works 60 to 80 hours per week as a lecturer at the University of Michigan’s Sweetland Center for Writing. She also spends her time helping local theaters develop plays. And the first time she took a vacation in the past 14 years happened this summer.

"It feels almost like a bigger price than the actual price tag in a lot of ways. I’m 39, highly educated, capable and work really hard. I have no savings. If an emergency happened, thank goodness I have my parents who can help. But I resent that I feel ashamed of it, I feel like I’m less than, and it’s really upsetting on a daily basis," says Manis.

Recent developments in Washington could help people like Manis pay off their loans. Manis qualifies for a student loan forgiveness program. That means if she works for a public institution for 10 years and makes her payments on time, her loans will be forgiven. If not, Manis expects she'll be paying back her student loans for the rest of her life.

Kyle Norris reported on this story.

* Listen to the full story above.