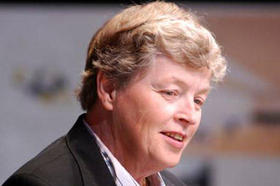 This is the second of four days of victim impact statements in the sentencing of former MSU gymnastics doctor Larry Nassar.

Woman after woman is speaking out to condemn Nassar for sexually abusing them.

And some, like Olivia Cowan, aimed strong words at Michigan State University's president and Board of Trustees:

“I’d like to take a moment to comment on MSU’s Board of Trustees, as well as the president of MSU, Lou Anna Simon. How convenient that you’ve decided not to attend today. You are a coward and your decision to watch from the sidelines is perfect representation of your lack of leadership.”

Later, she went on to ask this:

“Where were you when we needed you? If you would have only listened to all the women that brought complaints and concerns over all these years, this would have saved so many children and women from being abused and from all the scars this has created.”

John U. Bacon, Michigan Radio sports commentator, joined Stateside today to explain his takeaway from the situation up to this point.

On the victim statements heard so far

“…you better pull over,” Bacon said. “You can’t drive while listening to these things. You can’t do anything else. I’m getting a little choked up right now, and I don’t get choked up at all on this show…"

“It brings back my sensation of being in the Centre County courtroom in Pennsylvania listening to the Penn State victims. And it’s the same stuff, as far as the impact on them, how lives are shattered and how you see grown women and grown men, in the case of Penn State, become 12-year-old victims before your eyes. When you hear this, yes, it does have an effect, and you scream for justice.”

After initially putting out a statement saying MSU President Lou Anna Simon and Board of Trustees President Brian Breslin did not want to take attention away from the survivors and therefore would not attend the sentencing hearing, President Simon did turn up in the Ingham County courtroom today.

“I give her just this much credit for not ducking the second half, I guess,” he said. “When I heard the announcement yesterday, I was appalled. And not only that they were not going to be there when they should be there. They are partly responsible for this happening.”

“You can’t get to 100 victims without some adults looking the other way – impossible. So I believe they hold some culpability here, and I think their reason for doing so was an utterly insincere, gutless dodge. Cowardice."

“And that’s just what one of the victims says, ‘This was cowardice.’ And she’s right on this one…”

We asked an MSU spokesman why President Simon changed her mind and chose to attend this afternoon's court proceedings. He said she was watching the women's testimonials yesterday remotely and thought it was important to be there in person.