Are term limits crippling our legislators' ability to work together? 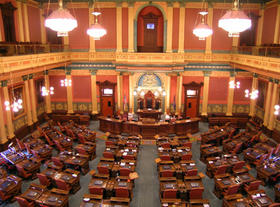 In a turn of events that surprised many, Rep. Todd Courser resigned his position on Friday, while Rep. Cindy Gamrat became the fourth state legislator in Michigan’s history to be expelled.

John Lidstrom was one of the veteran Lansing political observers watching that expulsion vote, and based on the editorial he wrote about the episode, it’s clear he did so with a sense of dismay.

“There’s no question this was an extremely difficult situation for the members,” he says, “but there’s precedence on how these things have been handled in the past.”

Lindstrom tells us there was a sense that the members of the House weren’t entirely prepared to deal with a situation like this.

But he adds it’s not entirely their fault.

“It really is the fault of the decision of the voters, more than 20 years ago now, to put into place term limits,” he says.

Lindstrom says term limits, to some degree, handicap legislators’ ability to work together.

“The greatest benefit [before term limits] was the ability for people to learn how to work with one another. Get to know what issues they’re concerned about, get to understand the perspectives that they’re coming from, get to understand that the fact that you’re a Republican or you’re a Democrat doesn’t mean that one side’s on the angels and the other side’s with Satan.”

Lindstrom says life in the Legislature wasn’t perfect before term limits, but “by and large, people could figure out how to take care of problems.”

Had the House been operating over the past few weeks without term limits, Lindstrom says House leaders would have been much more proactive in getting together to plan out how they would address the problem.

“You still have to recognize the partisan breakdown, but you would try to make this as nonpartisan a process as possible,” he says.

Lindstrom clarifies that he doesn’t fault Speaker Kevin Cotter for his decision to order the House business office to conduct an investigation, but says it would have looked better for everyone involved had he made that announcement alongside Minority Leader Tim Greimel.

“Speaker Cotter in effect issued a press release at 3 a.m. He probably could have waited until 6 or 7 a.m. after he had chatted with and made things clear with Mr. Greimel,” Lindstrom says. “And then he would have relieved a lot of the controversy that surrounded some of the aspects of the hearings and the investigation.”

“This, in many respects, was a failure of the body politics, not the politicians. They didn’t know what to do,” he says.