Locker room pioneer: Memoir details what it was like to cover Red Wings as female beat writer

Cynthia Lambert had the title many others dream of: sports reporter. She worked for the Detroit News covering the Red Wings for 12 seasons, including their Stanley Cup wins in 1997 and 1998.

Now she’s taken those seasons of sports reporting and packed them into her new memoir Power Play: My Life Inside The Red Wings Locker Room.

Stateside host Cynthia Canty sat down with Lambert to talk about her time in sports journalism.

On starting from the bottom

When she started covering the Red Wings in the mid-1980s, the team was the worst in the league. Nicknamed the “Dead Wings,” they would soon rise to the top as Stanley Cup champs in 1997 and 1998.

“It was really an evolution, and you can look at the different chapters almost in Red Wings history of that pocket of time,” Lambert said.

Emotions shifted, she said, when in 1986 the team hired as head coach Jacque Demers, someone she describes as “a very affable coach who was very good with the media.”

“People who started watching the Wings really got behind them in the mid-80s and then late-80s," Lambert said. "The fruits of that labor really paid off as they saw them steadily progress into the Stanley Cup team that we witnessed."

On her connection to sports

Lambert was introduced to hockey when her father flooded the backyard of her home on the east side of Detroit so her and her brothers could ice skate.

“When you grow up on the east side of Detroit in a house that had about a thousand square feet and a dog of course, you had to be outside a lot.”

She would go on to letter in tennis, volleyball, and softball in high school.

Although she said playing sports eased her way into the world of reporting, she doesn’t think it’s necessary for aspiring sports journalists.

She noted that a lack of background in sports, in some cases, might actually be to a reporter's advantage.

“If you have the guts and if you can leave your ego at the door and just go into a coaches room or talk to the general manager or scout or the player and just say ‘I don’t understand why you did this?’ or ‘Why did you make that play decision instead of this?’ or ‘Why are you doing this?’ you can get a lot of great information,” she said.

On being a woman in sports journalism

“I was pretty much on my own,” she said, adding that, although they were small in numbers, she enjoyed spending time with the other women sports journalists she met while on the road.

On the wide range of personalities she worked with

“One minute you think that you’ve got a great relationship, and that he’s being honest, and you’re having a great dialogue, and you had a great interview," she said. "And the next day, he won’t look at you. Or the next day he tells you ‘Oh, Chris Osgood’s gonna be in goal,' and then Mike Vernon comes out as the goalie. So there was a constant off balance with Scotty.”

Steve Yzerman, former team captain, she said, was unusually pleasant to work with as a reporter.

“I never had a bad experience with Steve Yzerman,” she said. “Interviewing him, if he had an issue with something I wrote, he would walk up to me, look me in the eye, speak his piece very respectfully, open it up for dialogue. We could agree, we could disagree, he could persuade me, I could persuade him, but there was never any lingering animosity or passive aggressiveness. He was just complete class.”

On the loneliness of the job

After five or six years of the job, in fact, she was told to clear out her desk and work from home to make room for someone else.

“So I was around all these people who were more like my colleagues … but they weren’t. It felt like they were, but they really weren’t. They were my subjects, and I had to cover them, and so I had to keep a distance.”

“I loved my job, but I knew that last year I couldn’t keep up this pace,” she said of her decision to leave. “There are women and men who still cover hockey, baseball, football, basketball, have families. They’re fine. I wasn’t one of those people. I knew I couldn’t do that.”

Though it was a tough decision, she says leaving sports journalism opened up other areas of her life.Support for arts and culture coverage comes in part from the Michigan Council for Arts and Cultural Affairs. 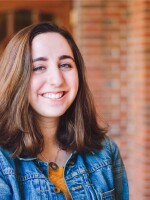 Lara Moehlman
Originally from New Jersey, Lara is a senior at the University of Michigan studying English and Spanish. She's an Online News and Investigative Intern at Michigan Radio and a recent alum of The Michigan Daily, where she's served as managing editor of The Statement Magazine and summer editor in chief. When she's not at Michigan Radio, she can be found listening to Bruce Springsteen or exploring a national park.
See stories by Lara Moehlman
Stateside Staff
Read more about the Stateside.
See stories by Stateside Staff
Classical IPR
Your home for classical music from northern Michigan and Interlochen Center for the Arts
Classical IPR home
Corporate Support
Your business can support public radio in northern Michigan
Local news coverage, straight to your inbox
Get IPR's weekly newsletter every Friday morning.
SIGN UP
Buy IPR merch
Tees, sweatshirts, hats, masks and more!
IPR store