Will Gov. Snyder change the agency blamed for the Flint water crisis?

It’s been almost six months since the Flint Water Task Force blamed the culture of the Michigan Department of Environmental Quality for the Flint water crisis.

The Task Force said a culture of quote “technical compliance” exists inside the drinking water office.

Its report found that officials were buried in technical rules – thinking less about why the rules existed. In this case, making sure Flint’s water was safe to drink.

Culture problems inside the MDEQ

When those problems became undeniable, the state finally acknowledged the MDEQ made mistakes that jeopardized the safety of Flint’s water.

This is from a press release sent by then MDEQ Director Dan Wyant last October:

"It recently has become clear that our drinking water program staff made a mistake while working with the City of Flint. Simply stated, staff employed a federal protocol they believed was appropriate, and it was not.

A few weeks after that announcement a top official with the MDEQ denied that the agency did anything wrong.

We spoke with Jim Sygo last November. He was the MDEQ’s chief deputy director and at the time, he was also interim director of the drinking water division.

Here’s what he told us:

Soon after that interview, Flint blew up into a huge national story, and the task force appointed by the governor laid the blame for the crisis squarely at the MDEQ’s feet. And in his State of the State address in January, Gov. Snyder said he agreed with the task force:

“The Task Force issued its initial actionable recommendations and identified critical problems in mid December, specifically, they pointed to a primary failure of leadership at the MDEQ and a culture that led to this crisis.”

We did nothing wrong

So with the governor, then-MDEQ director Dan Wyant, and the task force all calling for culture change, you might think people inside the agency would acknowledge the mistakes they made in Flint.

But that’s not what investigators with the Michigan State Police heard when they interviewed MDEQ employees in February and March.

We obtained a redacted copy of that report through the Freedom of Information Act.

It included an interview with Jim Sygo from March 1, 2016. During his interview, he said his boss at the time (former Director Dan Wyant) went too far when he said the MDEQ made mistakes.

From the state police report:

…. he looked harder at the LCR and told Director Wyant that he felt he overstepped his bounds when making a statement to the press that MDEQ made a mistake. Mr. Sygo stated that he didn't feel a mistake was made with the rule. However, Mr. Sygo said that there was never a correction in the media after he had approached Mr. Wyant on at least five different occasions about it.

We asked Jim Sygo for another interview to clarify but he declined.

The state police interviewed 10 other people in the MDEQ – every one of them denied doing anything wrong in Flint. 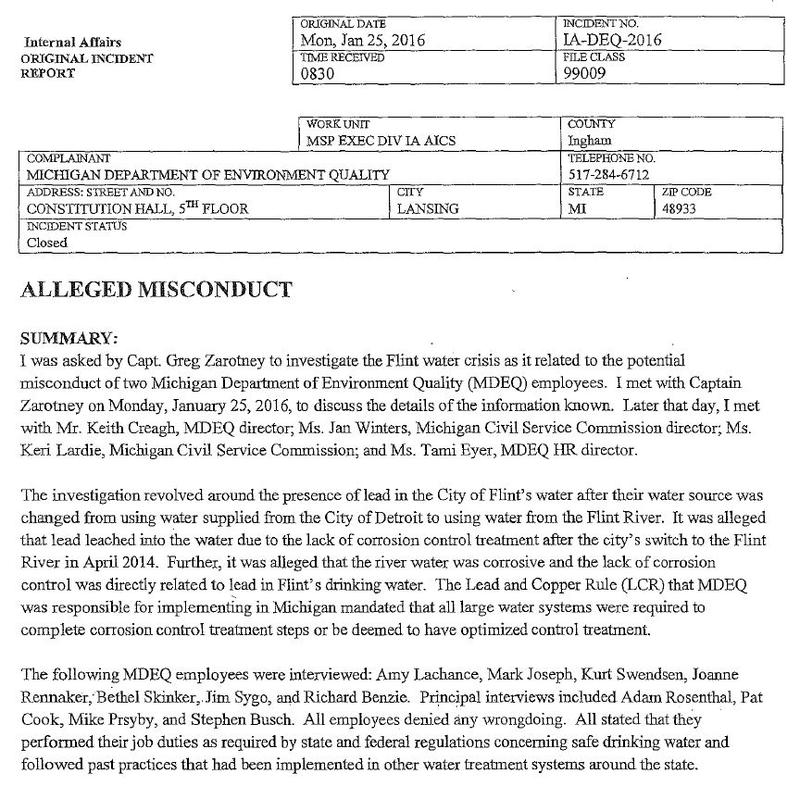 All employees denied any wrongdoing. All stated that they performed their job duties as required by state and federal regulations concerning safe drinking water and followed past practices that had been implemented in other water treatment systems around the state.

One person the police talked to said if he had to do it over again, he wouldn’t do anything differently.

The view of “culture change” from the top

Keith Creagh is in charge of the MDEQ. He became the interim director after Dan Wyant resigned last December. Creagh says one thing they’re working on within the agency is being less dismissive and combative.

“And so I think you will see, in fact I know you will see, a different mindset in how do we engage with both the citizens, the businesses ... And that is culturally significant.”

“I don’t think anyone would disagree the outcome in Flint is unacceptable,” Creagh said. “So since the outcome did not meet the tenets of what we’re here to do, and that’s to protect public health and provide safe drinking water, we need to change both the decision making framework and the culture so it doesn’t happen again.”

We asked Gov. Snyder for an interview, but that request was declined. His spokesperson, Ari Adler, sent us an e-mail saying Gov. Snyder has directed department heads to change the culture within their agencies.

“We also will be looking at more initiatives for state employees to feel comfortable about speaking up and speaking out if they see process improvements that are needed or believe there is something happening that isn’t being dealt with appropriately,” Adler wrote.

The view from inside the MDEQ

We talked to one long time employee in the agency who says changing the culture won’t happen overnight.

This employee says morale inside the agency has been low for a while, but it’s the worst she’s ever seen it now.

She didn’t want to do a taped interview, but she told us that politics has been clouding the agency’s focus for a long time.

Hearing Gov. Snyder blame a handful of “bureaucrats” for the problems rang hollow to her.

She says lawmakers and governors have put business interests ahead of the environment and public health, and they’ve made it harder for MDEQ employees to do their jobs.

You see this kind thing in the state police interviews too. In those interviews, another MDEQ employee, Richard Benzie with the drinking water office says they’re watched closely to make sure they don’t go too far.

Mr. Benzie said that in the last 25 years, MDEQ had been called on the carpet for overstepping their authority that wasn't listed in the regulations that the citizen didn't like that resulted in a call to the legislature. Mr. Benzie stated that often times MDEQ had been closely scrutinized by the Office of Regulatory Reform about implementing policies and practices that were statutorily mandated. Doing anything more than what the regulations stated would have been exceeding the authority they had been given under the rules.

Last January, former MDEQ employee Chris Grobbel told us he has many friends who work for the agency who are just riding it out.

“I saw a change maybe 15 years ago,” Grobbel said, “where good people with good minds and good hearts in that position trying to make a difference started to put their heads down, started to not make statements, and really just ride it out until retirement."

Another problem plaguing the agency is resources. Staff have been dealing with budget cuts for years. A 2010 EPA audit found the following:

“Resource limitations, including dramatic budget cuts, have had a significant impact on MDEQ’s (Public Water System Supervision) program. Increased regulatory requirements coupled with a decrease in available funding, have required MDEQ to prioritize program activities and focus resources on the most important program areas…

Will the culture really change?

People watching for culture change inside the agency say who Gov. Snyder picks for the next MDEQ director will say a lot about how he sees the agency going forward.

“The director really needs to look at morale and figure out how to improve morale for the employees right now … telling employees it’s OK to question decisions. Let’s focus on our primary mission of protecting human health and the environment. I think that starts to change the morale within the department.” says Kolb.

Monitoring and enforcing the state’s environmental laws is complicated work. And as we found out in Flint most recently, there is a lot at stake.

An official with Gov. Snyder's office says there's no word on when a new MDEQ director will be hired.

Flint’s water is still not safe to drink without a filter.

A lot of people have been asking whether the water is safe for bathing. Federal and state agencies say it is.