Why are Great Lakes birds dying from botulism? 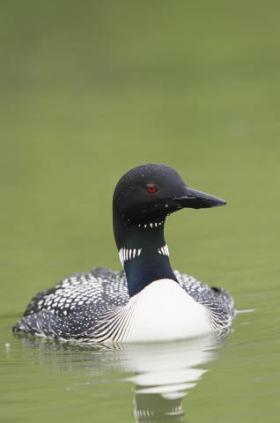 Imagine walking down a picturesque beach along Lake Michigan, and stumbling upon the carcasses of dead birds. That’s a very real and unpleasant problem along Lakes Michigan, Huron, Ontario and Erie. (It’s not as big of an issue in Lake Superior because of the lake’s colder water temperatures.)

Loons and other deep-diving birds are suffering from a disease called avian botulism. It’s form of food poisoning that kills wild birds in the Great Lakes ecosystem.

The U.S. Geological Survey explains that “avian botulism is a paralytic disease caused by ingestion of a toxin produced by the bacteria, Clostridium botulinum.”

Microbiologist David Blehert is with the USGS’s National Wildlife Health Center and he’s trying to figure out the scope of the problem, why it’s happening, and how to fix it.  Here’s our conversation.

Plastic junk in our oceans has concerned scientists for decades. Over the weekend, the New York Times reported on new research that minute plastic beads, the kind used in cosmetics and toothpastes, are ending up in the Great Lakes.

Michigan’s two U.S. Senators are raising a series of questions about the safety of an oil pipeline that runs under the Straits of Mackinac. Debbie Stabenow and Carl Levin are asking for a response from the federal agency that oversees pipeline safety.

Earlier this year Enbridge Energy increased the flow in line 5 by 50,000 barrels a day. That also meant increased pressure in the 60 year old line.

The senators point out that a spill in the waters of the Straits would have devastating effects on the Great lakes and on the region’s economy.

New Coal Plant Will Not Be Built On Northern Lake Huron

Electric customers in northern Michigan will not be paying for a new coal fired power plant.

Wolverine Power Cooperative announced Tuesday that it will not build its Clean Energy Venture near Rogers City. The Cadillac-based utility supplier put an estimated $20 million dollars into developing plans for the plant over the last seven years.