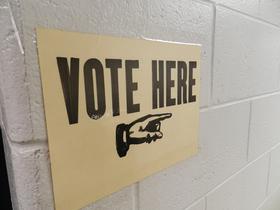 The November election is weeks away, and Tuesday is the last day for Michigan residents to register to vote.

The election will decide the state’s next governor, attorney general and secretary of state among many other races.

After a high turnout in the primary, Michigan’s former state Elections Director is predicting about four million voters will head to the polls on November 6th – which would be a pretty high turnout for a midterm.

Fred Woodhams is with the Secretary of State’s office. He says as far as the number of people registered to vote, it’ll be about the same as it was in 2014.

“We didn’t see four million turn out then, but clearly people are very engaged. The primary broke some records,” he says.

“Secretary of State Ruth Johnson did send the mobile office on a 3,000 mile tour across the state to Michigan’s public colleges and universities. Visited 18 campuses, signed up hundreds of young people to vote,” says Woodhams.

If you want your voice to be heard, you have to get to your local Secretary of State’s office or local clerk’s office to register. You can also view your sample ballot and get other information on voting here.