Backers of same-sex marriage are launching what an education campaign that could eventually evolve into a ballot effort to reverse Michigan’s constitutional ban on gay marriage. 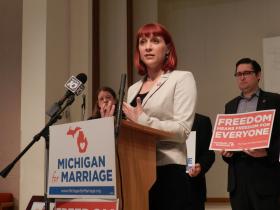 Emily Dievendorf is part of the “Michigan for Marriage” campaign. She says Michiganders need to understand why gays and lesbians want the same ability to marry as heterosexuals.

A federal judge recently struck down Michigan’s same-sex marriage ban.  The case is currently before a federal appeals court.

Dievendorf says if necessary, the education campaign can morph into a political campaign to put the issue on the 2016 ballot.

Michigan Attorney General Bill Schuette has filed a brief with a federal appeals court seeking to overturn a judge’s decision to strike down the state’s ban on same-sex marriage. In the filing, Schuette says the case is about voters’ rights, not the right of same-sex couples to get married.

Gay Couple Wants State To Recognize Marriage, “For Our 13 Kids”

The ACLU of Michigan is suing the state to force it to recognize the marriages of about 300 same-sex couples who got married last month.

Clint McCormack and Bryan Reamer are one of eight couples named as plaintiffs in the lawsuit, which was filed Monday.

AUDIO: Governor Snyder's Statement On The Legality Of Same-Sex Marriage In Michigan

Governor Rick Snyder says more than 300 same-sex marriages that took place over the weekend in Michigan are legal. But he says those couples won’t be formally recognized or offered the benefits of being married until after the appeals are resolved.

Listen
Listening...
/
2:50
Full audio of Gov. Snyder's statement to the press on the legality of same-sex marriages that took place Saturday in Michigan.