The U.S. Fish and Wildlife Service commissioned a report on the commercial grass carp industry. Grass carp are one of four species of Asian carp that officials are concerned about.

They’re used to control vegetation in lakes and ponds, and some people like to eat them.

But officials worry if they get out of control, they could eat plants that ducks, geese and native fish need.

In Michigan, it's illegal to possess grass carp, but the report points out laws on grass carp vary widely by state.

Todd Turner is the assistant regional director of the Midwest Fisheries Program of the U.S. Fish and Wildlife Service.

“There’s still a number of states that are allowing what we call diploid grass carp to be utilized within their state waters, and what that means is it’s a reproductively viable grass carp,” he says.

So there’s a patchwork of state rules. The report calls for a national strategy to reduce the risk these carp will get into places we don’t want them to be. 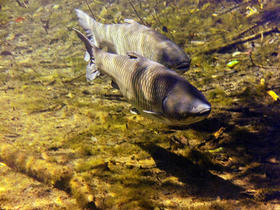 In the 70s, possession of grass carp was made illegal in Michigan, and the state's Department of Natural Resources undertook a massive effort to eradicate them from any place they were detected.

But problems can arise when fish escape these ponds.

"Wth any triploiding program, there's always the possibility that one or two fish may still be diploid and be able to reproduce," she says.

A few years ago, researchers found evidence that grass carp are reproducing in Lake Erie. They also found some positive Environmental DNA indicating the presence of Asian carp. That eDNA is found with a technique that analyzes water samples for traces of a fish's genetic material left behind in the form of scales, cells, feces or mucus.

Tammy Newcomb says state officials are concerned about grass carp reproducing in Lake Erie. She says they are even more concerned about two other species of Asian carp: silver (those are the ones that leap out of the water) and bighead carp.

"Late last summer we actually did a response exercise and the exercise was geared toward 'What would we do if we found bighead or silver carp, which is really a grave concern for us, in tributaries to Lake Erie?" Newcomb says.

During the course of that exercise, they caught and analyzed grass carp. They also attached radio transmitters to grass carp to learn more about their behavior.

This year, the department will continue to partner with the U.S. Fish and Wildlife Service to look for the presence of Asian carp in the Great Lakes as well as other bodies of water connected to the lakes.

"I once again expect that we'll be doing the high-priority watersheds, those places that serve as the gateway sentinels for us [such as] southern Lake Michigan," says Newcomb. "We did test Saginaw Bay last year, we may do that again this year; and of course the western end of Lake Erie, we'll keep up on that."