A never-ending $28 million battle against a Great Lakes parasite

If you ever get a chance to meet a sea lamprey, you won’t forget it. 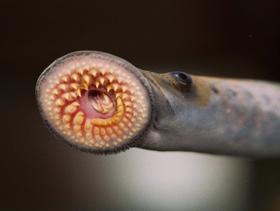 They look like an eel but they’re actually a fish. They have a suction cup for a face, with hundreds of razor sharp teeth.

“And they will sucker onto a fish and actually rasp a hole through the fish’s skin and scales and actually feed off the blood and body fluids of the host fish,” says Aaron Jubar. He's with the U.S. Fish and Wildlife Service in Ludington.

A threat to the lakes

Sea lampreys devastated the Great Lakes fishery in the middle of the last century, and we’re still battling them today.

“We estimate a single sea lamprey in the Great Lakes can destroy up to 40 pounds of Great Lakes fish through its parasitic life which is only about 18 months,” Jubar says.

They love to feed on lake trout, salmon, whitefish and steelhead - the prize fish at the top of the food web in the Great Lakes.

We spend more than $28 million in federal money each year to control the lampreys (according to the Great Lakes Fishery Commission, $20.9 million goes to sea lamprey control measures and more than $3 million is spent on sea lamprey research). A big part of that control program is finding out where the lampreys hide out when they’re little. 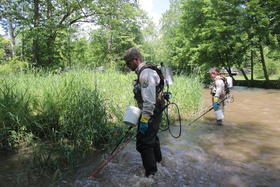 On the day I join Aaron Jubar and his team to go lamprey hunting in the Clinton River in Macomb County, they're wearing waders and gloves and they have metal contraptions strapped to their backs. They look like Ghostbusters.

“What we’re using today is our backpack electro-fishing units and these are specially designed to capture sea lamprey larvae,” Jubar says.

The backpacks send an electric current down through two metal probes. The crew members move these through the water looking for lampreys. 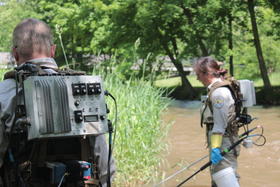 “And then that low pulse agitates them so they come shooting out of their burrows and when we see them, then we can high pulse and that actually completely immobilizes them and then we can scoop them up,” he says.

I’m in waders so I can get in the river too, but Jubar warns me not to touch the water.

“You would definitely feel it, the low pulse would be a sharp tingling; the high pulse, you’d feel that shoot up your arm,” he says.

Jason Krebill is stirring up the muck at the bottom of the Clinton River.

“Yeah, they’re ugly, but in the same regard, functionally, they’re kind of beautiful, you know?” he says. “As far as parasites go, they've pretty much got it down. They get a free meal and a free ride for the majority of their life. I think they sacrifice looks for smarts.” 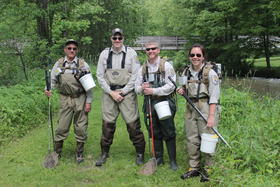 The U.S. lamprey hunting teams do 2,000 of these surveys all over the Great Lakes region every summer. And there are more of these teams on the Canadian side. They’re trying to find out where the lampreys are. If they find them, different crews come out and kill the lampreys with a lampricide.

Jubar says they’re constantly trying to knock back their numbers. It’s a battle that’s been going on since the late 1950’s.

“They’re a lot like cockroaches,” he says. “You leave two behind, you have a problem, because the females can have up to 100,000 eggs. So just one female and one male can infest this whole stream potentially.”

He says they’re keeping the sea lampreys in check in most of the Great Lakes. But in the past six years, lampreys have been booming in Lake Erie. In 2009, Jubar says they estimated there were about 30,000 sea lampreys in the lake. 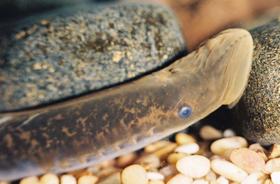 He says the St. Clair River is probably a big part of this puzzle. Jubar says they estimate there are more than 900,000 baby lampreys in that river.

He says as the St. Clair and Detroit Rivers have gotten cleaner, they’ve become better habitat for lampreys.

In addition, he says the lake trout and steelhead fisheries are doing very well in the eastern basin of Lake Erie, so there's more of the lampreys' favorite food available.

We turn up empty handed on this lamprey hunt. But Jubar says that’s actually a good thing.

“We’ve never found them up this far, but we are very vigilant,” he says.

And they’ll keep doing this work, every single summer, to try to stay on top of this expensive, blood-sucking parasite.

The State of Michigan is weighing whether to open the door to commercial fish farming in the Great Lakes.

Millions of rainbow trout are raised for food by Canadians every year in Lake Huron and promoters of the business say Michigan should follow suit and could even become a world leader in aquaculture.

State officials are trying to figure out what the risks are and the idea is likely to face opposition from sport fishing groups and other conservationists.

Michigan's missing the boat on its freshwater economy

You can see Michigan from space. It’s the mitten surrounded by all that blue with the bunny jumping over it.

In fact, almost half of the Great Lakes State is comprised of water. Michigan has more shoreline than any other state in the union, with the exception of Alaska, which is seven times larger.