Lake bacteria can kill your dog

ShareTweetEmail
Listen
Listening...
/
Listen to this warning. It might save your dog's life.

What happens if your dog likes to swim in the lake, but there might be toxins in the water?

It can happen in a local lake or somewhere like the western basin of Lake Erie. Toxin-producing cyanobacteria appear. Some people still call it blue-green algae. 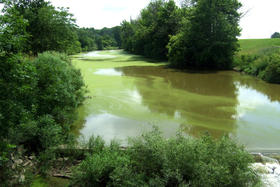 “Starting like late July, early August it starts to look like liquid guacamole,” said Bill Braunlich, who lives right on Lake Erie near LaSalle, Michigan. He and his husband Michael Meyer own a Bahamian Potcake dog named Ruby.

“It means we have a high level of concern. We have a dog that by nature is very athletic and an excellent swimmer and we simply don’t allow her to swim in the lake. It’s really unfortunate. It’s sad. It’s disappointing. We know of cases in which animals have gotten very sick and unfortunately have died. So, by nature she’s a swimmer, but we simply don’t allow it,” Braunlich explained.

The next-door neighbors look at it a little differently.

“She needs the exercise. She’s a Jack Russell Terrorist," Diane Thurber laughed, adding: "She needs to get a lot of exercise every day. So, if she can swim, we let her.”

Thurber, her husband Neal and their dog Ava joined Ruby and her owners next to the Lake Erie shoreline to chat.

“You’re not going to put a dog in the lake and not have them take a drink. They’re just going to," Diane Thurber said. They try to prevent exposure to the cyanobacteria. "We monitor instead. We watch the different websites that are available through NOAA. If we don’t see the algae and we’re in the water, then she can go in the water too. So, she probably goes in every single day right up until August gets here and the heat gets high and we start to see the green,” Thurber explained.

As they talked, Bill Braunlich noted another neighbor’s dog got into the water last summer.

“And they said Zoe, their chocolate lab, got very sick and they had to take it to the vet and get a shot,” he told his friends.

“Wow! I wasn’t even aware of that. I’m glad that Zoe is okay,” Diane Thurber responded.

A toxicologist at the Cornell University College of Veterinary Medicine was recently quoted in the online magazine Futurity. Karyn Bischoff warned about the dangers cyanobacteria can pose to pets and livestock. A kind of cyanobacteria called Microcystis can produce blooms which can be toxic.

“So, there are neurotoxins. There’s one that really similar to certain insecticides that can cause salivation, diarrhea. It can cause fluids to go into the lungs so they can kind of drown in their own fluids. There’s another one that’s similar to nicotine in cigarettes. At a very high dose it can cause muscles to all be excited at the same time and then the nerve impulses don’t stop so the muscles eventually wear out and you get more of a paralytic disease,” she said.

And then there’s the most common toxin.

“The hepatotoxin. And, it actually kills the liver cells so fast that they can actually bleed out into their liver very quickly,” Bischoff said.

With smaller exposures, the dog can appear to be okay and then 72 hours later start to have liver failure.

Bischoff says it’s important to keep an eye out for the first traces of cyanobacteria. Some people say the blooms can look like someone spilled paint in the water. Even after it’s gone, Bischoff says the danger is not over.

“If you know there’s been a bloom there, some of the toxins can hang out in the water for a long time after the cyanobacteria are dead. So, even if it starting to clear up, you probably don’t want to let your dog out there for a few more weeks,” she said.

As for whether to keep your dog out of the water, she didn’t say absolutely one way or the other, but she did have some advice.

“I would say, get the dog a swimming pool.”