How firefighters think about - and try to reduce - their cancer risk 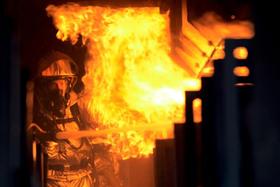 Firefighters have dangerous jobs. We all know that.

But a growing body of research suggests those dangers don’t go away once the flames are put out: several studies say firefighters have a significantly higher cancer risk, even when they’re young.

This isn’t a shock to a lot of firefighters. For decades many of them have watched their bosses and their buddies get sick.

How a new engine house can help reduce cancer risk

Highland Park’s engine house is one of the busiest fire stations in the state, fighting about 150 fires a year, according to Chief Derek Hillman.

But it’s also a new station, built in 2013. Hillman says they got a federal grant to pay for it.

Several parts of the station are meant to help reduce cancer risk – a risk that’s been on these firefighters’ minds the last several months, ever since one of their guys was diagnosed with non-Hodgkin’s lymphoma at the age of 27.

“The guys are very supportive of him,” says Chief Hillman. “You know, ask him whatever he needs, cover his shifts … do whatever they need to help him. They’ve rallied all behind him.”

You can tell how proud the chief is of the new engine house as we walk through. 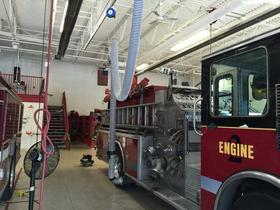 What’s remarkable is that when you walk into the enormous garage where the fire trucks are, it’s so clean. The walls are beautiful, sparkling white. You don’t even smell diesel exhaust.

That’s because of these huge vents that look like hoses. They come down from the ceiling, attach to the trucks' tail pipes and suck up all the exhaust.

“So as the truck turns on, it actually senses the pressure and it starts a vacuum like and sucks this up and out of the building,” Hillman says.

Where the risk comes from: diesel exhaust, soot, and burning chemicals

In their old engine house, the walls were black with diesel exhaust, which is widely considered to be a carcinogen.

The exhaust is, of course, filled with carbon monoxide. But it’s also full of soot.

And soot is one of the big cancer villains in firefighting. It can get stuck in your lungs and stay there for years.

Of course, firefighters run into burning buildings filled with soot – soot laced with all the chemicals and fire retardants in our furniture.

For decades they have used personal breathing masks, which help a lot.

But all that soot still gets on their skin, which is then absorbed into their bodies.

“I think there was something the other day on our hoods, the guy were soaking them,” says Highland Park firefighter Eric Steinhebel, sitting in the living area of the station – which is completely sealed off from the garage.

“[They were] soaking them in uh, just hot water first. Let it sit there for an hour, pull them out, it’s completely black.” 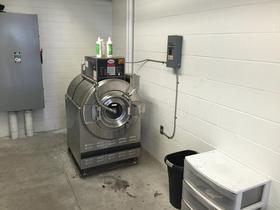 After going into a fire, firefighters’ suits are basically marinating in carcinogens, which is why the new engine house has a commercial washer and detergent meant to remove carcinogens as much as possible.

But it takes 24 hours for the gear to dry after it’s been washed.

And these firefighters don’t have back-up suits.

So they only wash their gear on their days off.

“[Soak the hoods] again, clean water, completely black. Put it in the washing machine with soap, detergent, wash it, put it back in that bucket, let it sit for another hour it’s still black. You just can’t get that stuff out of there,” says Steinhebel.

And of course, every time they put on that dirty gear, their skin gets exposed to that soot all over again.

“I think as you get older, you think more about it,” says Steinhebel. “Certainly more than you did when you were young. You know, [Highland Park firefighter] Bellamy here today, he’s 19 years old. Doesn’t give it a thought. Me pushing 40, with a little baby at home? Then you’re like, hmm, ok.”

Recently the National Institute for Occupational Safety and Health at the Centers for Disease Control wrapped up a massive study on firefighters and cancer.

They looked at 30,000 firefighters in multiple cities, combing through 60 years of health records.

They found firefighters have a greater risk of digestive, oral, respiratory and urinary cancers.

And they’re twice as likely to get cancers linked to asbestos exposure.

But once firefighters have upgraded their engine house, what exactly are they supposed to do with this information?

It’s not like everyone can just stop fighting fires.

“There’s no real hard core answers,” says Steinhebel. “We don’t know facts. There’s nothing there for us, we don’t really know.”

In the mean time, firefighters have do their jobs – while doing what they can to lessen their cancer risk.