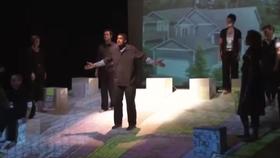 A Grand Rapids theater company is on a mission: to produce plays that are written by local playwrights and designed to shine a bright light on social issues.

ADAPT. Theatre Company does just that with their new production, LINES: the lived experience of race 2016.

Six actors play 64 members of the Grand Rapids community. They speak of racial issues that affect people in West Michigan, from gentrification to white privilege, education, religion and justice.

Stephanie Sandberg is a playwright and the artistic director of ADAPT. Theatre Company. Sandberg first wrote LINES in 2010, but given the events and rising tension in recent years ,she says she decided it was time to revisit the piece.

“When I first moved [to Grand Rapids], which was 20 years ago, I saw immediately that … this city was different. People were not racially integrated at all. Not in school, not in church, not in the public sphere. And I had noticed that, and I’d seen some things change in that over time, but not very much, even with all the changes that we try to make in terms of legislation and so on. I’d seen backwards steps happening, and I wanted to address what was happening in my city,” Sandberg says.

“So I first wrote this play [six] years ago in 2010, and then with all the events that have transpired over the last year and a half, two years with racial injustice, I decided that I wanted to rewrite it. And so I did a 2016 edition.”

Sandberg writes what is called verbatim theater. She explains that the style is documentary in nature and is pieced together from interviews with real people. She says LINES is built upon the stories and experiences of 177 Grand Rapids residents.

Darius Colquitt and Gulshirin Dubash are two of six actors tasked with portraying the 64 characters included in LINES. Colquitt is responsible for a dozen characters, while Dubash takes on six base characters and “three or four smaller characters” throughout the piece.

They tell us the challenge doesn’t just come from having so many characters on their plate, but also from the wide variety of mindsets they have to sink into.

“I would say that the Islam individual in our religion section, he was probably the furthest reach for me,” Colquitt says, “just because I don’t entirely connect with every single point he makes. But a lot of what he says does connect with me.”

Colquitt tells us it’s hard to pick which character he felt closest to.

"A lot of them are really close to my heart. I feel the stories that the professional individual tells about moving into a new place and just trying to make a better life. And also, I’m very close to the story about the minister who has seen all of these different people go through the social injustices in town, and I can relate directly to some of those, so I’m connected with every character I have almost. It’s kind of rare, but it's a beautiful thing," Colquitt said.

“I actually identify with the Islamic female character probably the most, even though I’m not Muslim,” Dubash says. “What she has gone through is something that I have as well in America. There are a couple of white characters who are a bit of a stretch for me, so that’s actually really interesting. So yeah, I think the Latino and Muslim characters are the ones that I identify with and can relate to the most.”

Colquitt tells us that this piece has given him a greater appreciation for the way different people in a community can look at one another and understand each other’s struggles.

“I would say the top thing for me that I've learned throughout this entire process is that there are actually people outside of my race - I’m an African American man - there are people outside of my race that do care about the issues that we endure,” Colquitt says. “It always seems that when you are of a specific racial group, that you’re the only one who understands your issues or you’re the only one who sees your issues just because you have to deal with them directly. Well, what I’m finding through this piece and working with these wonderful people that I get the chance to play with every night, is that we all are one, and we all see and we all understand, and unless we all can come together and find common ground and work toward these issues as one, we’ll never be able to really find that unity we want.”

Dubash hails from Bombay, and when she came to Michigan she says she saw some stark differences between Grand Rapids and her hometown. But like Colquitt, Dubash tells us working with the ADAPT. Theatre Company has changed the way she sees the community around her.

“Bombay’s a very integrated city. We have friends and people from different religions, different communities, backgrounds. I mean, it’s just sort of day to day part and parcel of our life, so we don’t think about race and religion in the way in which Americans do for the most part,” Dubash says. “How I choose to view what is healthy for the community and not has changed, and so in some ways my interest and love for this city has grown even more because it’s grown in a different way with a greater amount of empathy and compassion.”

Though its foundations were laid six years ago, Sandberg feels that LINES shares a message that’s just as important today as it was in 2010. The play challenges the audience to think about where they live and how they respond to race-related division in West Michigan.

“There’s been a 20% increase in incidents of racial hatred and incidents of reported race discrimination in the last year. Now, you tell me what’s going on there, why is that happening?” Sandberg says. “I learn more and more about my community and my world as I do this, and it’s disturbing ... And as a playwright I have a huge responsibility to tell these stories and to make sure that we’re figuring out how to change this.”

LINES: the lived experience of race 2016 will be at the Wealthy Theatre in Grand Rapids from March 25 to April 3. More information can be found on their website.