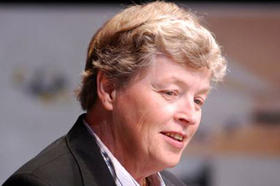 Former Michigan State University president Lou Anna Simon is scheduled to be in front of a judge Monday for an arraignment. Simon is charged with two felonies and two misdemeanors for allegedly lying to law enforcement.

Law enforcement officials say Simon falsely said she didn’t know certain details about an investigation into Larry Nassar in 2014. Nassar is the former MSU sports doctor who sexually assaulted his patients for decades.

Lee Silver is Simon’s attorney. He says his client is innocent.

“I have not seen a shred of evidence to support these charges, which I believe are completely baseless,” he says.

According to court documents, Simon told law enforcement she didn’t know Nassar was the subject of an investigation in 2014. But officials say they have evidence that shows Simon knew Nassar was being investigated for sexual assault.

At her arraignment, Simon is expected to plead not guilty and future court dates will be set.

Michigan State University has named a search committee to find a new president.

A former Michigan State University coach was back in court Thursday on criminal charges.

An Ingham County District Court judge determined there was enough evidence to send Kathie Klages to trial. She’s charged with a misdemeanor and a felony.