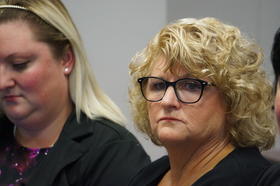 A former Michigan State University coach was back in court Thursday on criminal charges.

An Ingham County District Court judge determined there was enough evidence to send Kathie Klages to trial. She’s charged with a misdemeanor and a felony.

Prosecutors say Klages lied to law enforcement during their investigation into what MSU knew about Larry Nassar and when. Nassar is the former MSU sports doctor serving a de-facto life sentence. Hundreds of women say he sexually assaulted them under the guise of treatment.

Prosecutors say Klages lied when she told law enforcement that no one reported Nassar’s behavior to her.

Larissa Boyce says she was a teenager when she saw Nassar. She says she told Klages that Nassar digitally penetrated her without gloves.

“She said that I must be mistaken, that she had known Larry for years and years. And that they were good friends and that he would never do anything inappropriate,” says Boyce.

Mary Chartier is Klages’s attorney. She says the real liar was the investigator who interviewed Klages.

Chartier also says that anything Klages said did not have an impact on the investigation.