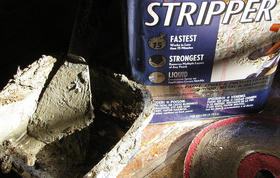 Update: On June 18th, 2018, The Home Depot announced it would phase out paint stripping products containing methylene chloride and NMP by the end of the year.

The Environmental Protection Agency and at least one retailer have done an about face on a chemical linked to dozens of deaths, but health advocates want more.

Beth Kemler is with the group Safer Chemicals, Healthy Families.

"I don't think that there is a way that you could possibly warn the public enough. I think it just needs to be off the shelves," she says. “We know that more than 60 people have died since 1980 from using methylene chloride there are probably a lot more people that we don't know about.”

Inhaling methylene chloride fumes can cause dizziness, and the chemical can irritate the skin, eyes and respiratory tract through inhalation, or through the skin. Some products that contain the chemical include warnings. Until recently, the only one required on the label included long term exposure risks for cancer.

But carbon monoxide forms in the body when methylene chloride is inhaled, and that can become deadly.

Congress amended the Toxic Substances Control Act in 2016. That allowed EPA to restrict chemicals like methylene chloride. And under the Obama administration, EPA did propose a ban on the chemical’s use in paint strippers, but the proposal was put on hold last December by the agency.

Movement from EPA and Lowe's

Beth Kemler says things changed a few weeks ago. That’s when a delegation of people whose family members had died from methylene chloride inhalation met with EPA administrator Scott Pruitt in Washington. They told the stories of their loved ones they lost.

But she says it’s not clear how soon that proposal will be finalized.

Kemler and others aren’t waiting for the EPA. They’re campaigning for retailers to stop carrying products that contain methylene chloride now.

In late May, Lowe’s announced that by the end of the year, it would phase out products containing methylene chloride. The company’s also planning to phase out another chemical in paint strippers thatEPA is looking at, called NMP. In a statement, a Lowe’s spokesperson says “great progress is being made in the development of safer and more effective alternatives.”

Some people warn there are other risks in addition to the documented fatalities. Maureen Swanson is with the Learning Disabilities Association of America.

"Pregnant women exposed to methylene chloride or NMP have babies who are at higher risk for learning and developmental problems including ADHD-like behaviors," she says. "EPA states that children in the home when methylene chloride is used can suffer permanent learning impairments, so that's just being in the vicinity."

These chemicals can also affect the nervous system.

Swanson says there is no reason for stores, like The Home Depot, to delay removing products that contain these chemicals from their shelves.

In an email, Home Depot spokeswoman Margaret Smith says, "We continue to follow EPA regulations. The primary demand for these products is from our professional contractors, but we urge anyone to closely follow safety precautions, as with any product."

Kara Holsopple is with the environment news program, the Allegheny Front.