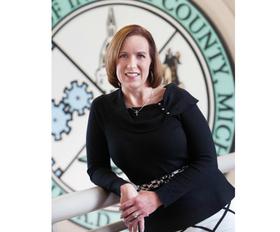 County clerks across the state are getting ready for however the U.S. Supreme Court might rule on legalizing same-sex marriage.

Ingham County Clerk Barb Byrum says she’s keeping an e-mail list of gay and lesbian couples that want to get married, “…so when a decision in support of equality does come down, I can have direct communication with those parties that may be interested in obtaining a marriage license.”

Byrum was one of the four county clerks who opened their doors on a Saturday in March of last year to allow same-sex couples to marry during the brief window when it was legal in Michigan.

This time around, Byrum and other clerks say they’re frustrated the state has not provided them with gender-neutral marriage license forms so they can be ready if the Supreme Court legalizes same-sex marriage.

Clerks are required to use the state-approved marriage license application.

Jennifer Smith of the state Department of Health and Human Services says it should not take long once the decision is released.

“It wouldn’t be a very long, involved process,” she said, “But we would just take the time to review the ruling and move forward from there.”

But clerks say that means it will likely be a few days after the decision before the new forms will be entered into their computer systems. Some say they plan to improvise so gay and lesbian couples won’t have to wait in the event the Supreme Court legalizes same-sex marriage.

Brown also briefly opened in March of 2014 to allow same-sex couples to get married.

Brown and Byrum say they intend to waive the state’s three-day waiting period for a marriage license for gay and lesbian couples who want to wed right away if the Supreme Court strikes down Michigan’s same-sex marriage ban.

There is no guarantee the court will allow same-sex marriages. The two questions before the court are whether same-sex couples have the right to get married no matter where they live, and whether states are obligated to recognize gay and lesbian marriages performed in other states where it’s legal.

Two of the plaintiffs are April DeBoer and Jayne Rowse, a lesbian couple from Hazel Park who challenged Michigan’s same-sex marriage ban.