Is coal on the way out in Michigan?

Michigan is saying goodbye to nine of its smaller and older coal-burning power plants.

DTE Energy is closing two facilities. Consumers Energy will shutter seven more, which are nicknamed the "Classic Seven." I recently toured one of these aging workhorses of electricity, B.C. Cobb in Muskegon.

It's a very cold spring day, and it's colder still on the roof of the B.C. Cobb plant. But the view is spectacular.

"(There's) Muskegon Lake in all its glory and beyond there you can kind of see the dunes of Lake Michigan. This is our ship channel and there's our coal pile," says Roger Morgenstern, a spokesman for the plant.

Since 1949, the plant has helped provide highly reliable electricity to generations of Michiganders. But it also polluted Lake Michigan with mercury and the air with particulate matter and chemicals. The Clean Air Act began to change that.

Morgenstern points out the emissions-control equipment that was installed in the 70s to take particulate matter out of the air.

Consumers Energy spent tens of millions of dollars over the years on this one plant to keep up with ever-tightening federal regulations. But it would be too costly to meet the new mercury limit.

So when B.C. Cobb is demolished, Muskegon will lose one of its biggest taxpayers, some people will lose a job, and some endangered birds will be looking for a new home.

"We have peregrine falcon nests. They have a couple wood boxes on the stack. They like tall places, so our chimney, our stack, is a great place for them to nest," says Morgenstern. 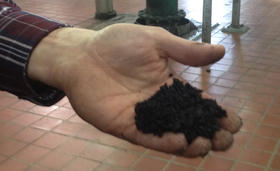 Inside, the plant is surprisingly clean. Everything is big: the conveyer belts snaking the coal into the 4000-ton storage hoppers, and especially the boiler — it's eight stories high.

Now, all those tons of chunks of coal aren't going directly into the burner.

"It's going down these chutes and then it's going down into the basement," Morgenstern says. "They have these huge ball bearings, and it smashes up the coal. We don't burn chunks of coal, we burn powder."

And when that powder is blown into the boilers, it combusts immediately.

The top floor of the plant is so hot and so humid, it's hard to breathe. It was 130 degrees Fahrenheit.

Everything is obsessively controlled, from the boiler fire to the superheated steam to the electricity itself, which is sent to the transformers outside and then to thousands of homes and businesses.

So people can turn on the power they need at the flick of a switch.

Other coal plants could face shutdown

The shuttering of the Classic Seven is likely just the beginning in Michigan.

A new EPA regulation, known as the Clean Power Plan, will regulate emissions of climate-warming carbon dioxide for the first time.

That means many of Michigan's larger coal-burning power plants may have to shut down as well.

By the way, Consumers Energy isn't abandoning its peregrine falcons. The utility is trying to locate another site on a nearby Muskegon high-rise where it can place nesting boxes for the birds.

With so many coal-burning units going offline at one time, Michigan could soon face an electricity shortage. On Thursday, the Environment Report will look at the policy fight over how to replace the lost power.