Many would consider arguing a case before the U.S. Supreme Court to be the pinnacle of a lawyer’s career. For lawyers facing that opportunity, a new study offers advice. 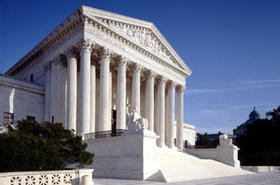 In a nutshell: don’t get flashy and don’t try to tug on “judicial heartstrings” when writing briefs for the big case.

The study is co-authored by Ryan Black, a Michigan State University political scientist and expert on the Supreme Court.

Black said his study focused on the impact briefs have on votes cast by Supreme Court justices. His findings suggest that briefs, and the way they’re written, are important to justices’ decisions.

“The justices can be swayed by what is inside the briefs,” he said. “And it’s not just the arguments, but it’s also the way that you couch the arguments and the language that you use.”

Yet to many, it’s difficult to separate the Supreme Court’s partisanship from its decisions. Many feel justices are almost always going to vote based on their political leanings, heedless of the briefs.

Partisanship, of course, does have a “sizable impact” on Supreme Court decisions, Black said, but it doesn’t explain each vote cast.

“[Partisanship is] not explaining 100% of the votes that are going, and actually [it's] not even explaining close to 100%,” he said.

Several components contribute to the decisions, including content of the briefs written.

He said justices are exposed to countless legal arguments, or briefs. They therefore develop shortcuts and ways of digesting the information faster than someone else would.

“The argument that we make is that when you use this flashier language – more sort of emotional language – that this is sending a signal to the justices that the credibility of your argument might not be particularly strong,” he said.

Some words that might set up red flags for the justices include the following:

For more, including how this research could apply to lower courts, listen above.