On Tuesday, Central United Methodist Church in Traverse City announced it will join the Reconciling Ministries Network in opposition of that ban.

Reconciling Ministries Network (RMN) is a union of Methodist communities across the country that embrace the full inclusion of LGBTQ members.

Nan Horstman, Task Force Chair at Central United Methodist, says they want to send a message to other Methodist communities.

"We want to be welcoming despite what our denomination is saying," she says. "A reconciling congregation is a public statement that we welcome all."

Nearly 90 percent of the church's members voted in favor of joining RMN. Over 1,000 other Methodist congregations and communities are in the national network. 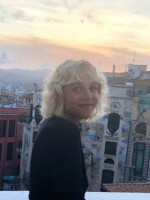 Bronte Cook
Bronte Cook is a rising third year student at Ithaca College pursuing a B.A. in journalism with a minor in women and gender studies. There, she is a recipient of the Park Scholar Award, a competitive scholarship presented to individuals with a passion for media, leadership and community service.
See stories by Bronte Cook
IPR Shows & Podcasts