Hundreds of runners will compete in the Crystal Lake Team Marathon this weekend. The race was started nearly 40 years ago by the late Benzie Central Coach, Eldon “Peter” Moss.

He was the backbone of the Benzie Central track and cross-country legacy, winning eight state championships and numerous state and national coaching honors.

This will be the first year that he will not be present to fire the gun at the start of the race. He passed away this spring, and will always be known for changing the lives of those he coached.

One student in particular remembers Moss as a father figure in his life.

When Jeremy O’Shea was growing up, he had nobody to take him to cross country practice in August, forcing him to hop on his 10-speed bike for the commute. The route was roughly 20 miles each way.

“I would get up at 5:30 in the morning, and I would start my trek from Healy Lake Road, which was past Copemish and Kaleva and bike all the way to Benzie High School,” he said.

O’Shea liked the ride in the morning, when it was still dark and quiet.

Moss first noticed O’Shea in middle school when he ran in the spring field day. He encouraged O’Shea to consider joining the cross country team that fall. Moss was aware that O’Shea’s mother was fighting an aggressive form of brain cancer.

“I was going through a very difficult time because my mom was actively dying. You don’t realize when you are that young but it was a difficult time,” Jeremy said. “(Moss) was sort of that little bit of light”

Just before O’Shea’s mother died, Moss encouraged him to try running a few miles a day. One night, O’Shea decided to go for a run. His mom and her sisters were taking a drive to watch the sunset.

“They stopped on the side of the road, and I gave my mom a big hug. She had a beautiful smile on her face and she told me that she really liked to watch me run. It wasn’t much of a thing at the time, but I know it’s huge now. That, along with Coach Moss… that’s when I started running and the rest is history. Coach Moss knew that I was running for my mom,” O’Shea said.

His mother never saw him race. He went on to win multiple cross country races throughout high school and was a state finalist for three years. He attended Alma College on an athletic scholarship and later became a doctor.

Once O’Shea lost his mother, he felt his father didn’t provide him with much support. Coach Moss became a father figure in his life.

“I do remember winning my first race,” O’Shea said. “It was a small little meet, but I blew everybody away and that is when Coach Moss said, ‘Well we have a ringer here.’ He was excited. Very excited. It was just good to have somebody in my corner.”

Moss was no stranger to adversity. He worked in a factory for many years following his service as a Marine in WWII. He later decided to become a social studies teacher and coach. O’Shea remembers one time in particular when Moss drove him home.

He credits Moss for where he is today: a physician in Florida with a family. O’Shea said he still hears the voice of his old coach.

“I can hear him in my ear. Telling me ‘get your knees up... pump your arms.’ Especially, as a doctor, I’m an ER physician, it can be pretty rough with some of the things that you see going through the emergency department. A lot of what he taught me really carried over and got me over some very difficult times in residency and medical school as well.  He has had a large impact on my life, and he continues to have a large impact,” O’Shea said. 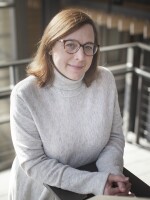 Gretchen Carr
Coordinator of Operations and Engagement, Gretchen Carr joined the IPR staff in 2019. With her background in the performing arts, education, history, arts administration, and communications, she works to keep the daily operations at IPR running smoothly. A native of Traverse City, Michigan, she received a Bachelor of Arts in Music from Western Michigan University and a Graduate Certificate in Historic Preservation from Eastern Michigan University. Gretchen is also a multimedia artist focusing on film, writing, soundscape, and radio story.
See stories by Gretchen Carr
IPR Shows & Podcasts