A few years before the Great Recession, I was an advisor to the Federal Reserve Bank. I provided some limited advice on how to stimulate growth through innovation. It was too little, too late. Many financial experts far more capable than myself tried to help prevent the imminent collapse. But the politicians were sure they knew more about our economic system than the experts. Hindsight proves they knew very little and it was the everyday American who suffered from their ignorance and arrogance.

So here we are again. Less than a decade away from our brush with economic Armageddon, we are deregulating the financial industry. We don’t need the Dodd-Frank Wall Street Reform and Consumer Protection Act because the same financial institutions that were too big to fail (but required trillions of dollars to bail out) will apparently regulate and police themselves. It’s like returning to the honor system when half of the class was caught cheating and still failed the exam.

On top of that, the big investment banks have now invented something called spread networks. Author Michael Lewis brought these to light via his bestseller, Flash Boys. Basically, these networks give big banks an advantage by executing trades faster than everyone else, allowing them to buy lower and sell higher than the average Joe. While these spread networks game the system that the banks themselves created, the bigger problem is that they trip trading algorithms in other financial institutions. Forget irrational exuberance – this is artificial exuberance. These systems are not responding to market dynamics. They are creating them.

Ironically, investment banking itself was created from the outside-in. In the eighteenth century, inherited property was the only pathway to wealth. Mayer Amschel Rothschild, a Jew from Frankfurt, helped create many of the financial innovations we still recognize today: global banking, bond markets, foreign exchange and arbitrage. Rothschild, who endured pogroms and daily doses of anti-Semitism, developed imaginative ways to infiltrate a system designed to keep people like him out. Today, the biggest innovations in finance are largely happening outside of the financial community, as well. Digital cryptocurrencies, like Bitcoin, are emerging as viable financial alternatives. They’re basically managed via a continuously growing distributed database called a block chain. All users have a record of all transactions all the time, which means no hidden fees, accounting errors or hacked accounts. In other words: No bank needed.

Innovations like Bitcoin can disrupt more than just financial institutions. They can move independently of borders and the laws that govern nations. They can be used for illicit purposes without detection. Most importantly, since the government has no line of sight, collecting tax on these transactions is almost impossible.

Increasingly, digital innovations are being used to bypass ATM fees, deflect overage charges, and switch credit card debt to lower cost alternatives. They provide lending networks that are an affordable substitute to predatory payday loans, as well as algorithms that predict the credit worthiness of people with no credit history. And these are just the beginning. In the near future, artificial intelligence software, along with open and pervasive internet access, will make it easier to disintermediate the big banks. The ability to connect lenders with borrowers, manage complex corporate transactions like mergers, and invest capital productively will no longer be the monopoly of the banks.

While our largest financial institutions are lobbying to recover the freedoms they enjoyed before they destroyed the economy a decade ago, entrepreneurs are innovating their way around them, creating a financial future that will make banks more and more irrelevant. Which makes one wonder if someday, we’ll hear the phrase “Too Slow to Fail.”

The Next Ideais Michigan Radio’s project devoted to new innovations and ideas that will change our state.Join the conversation onTwitterorFacebook, or let us know your Next Ideahere.

(Subscribe to The Next Idea podcast oniTunes, or with thisRSS link.) 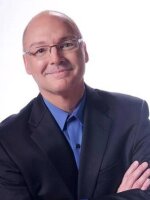 Jeff DeGraff
Jeff DeGraff got his nickname, the Dean of Innovation, because of his influence on the field. Dr. DeGraff is Clinical Professor of Management and Organizations at the Ross School of Business at the University of Michigan.
See stories by Jeff DeGraff
Classical IPR
Your home for classical music from northern Michigan and Interlochen Center for the Arts
Classical IPR home
Corporate Support
Your business can support public radio in northern Michigan
Local news coverage, straight to your inbox
Get IPR's weekly newsletter every Friday morning.
SIGN UP
Buy IPR merch
Tees, sweatshirts, hats, masks and more!
IPR store