What's the deal with the orange men on Michigan buildings?

If you’re traveling in Metro Detroit on I-96 you might see something a little out of the ordinary near the Milford Road exit: an orange man.

The orange silhouette of a broad-shouldered man wearing a 1950s-style fedora can be seen on buildings throughout Metro Detroit and in more than 60 locations across the state of Michigan, thanks to the Man In The City Project spearheaded by artist John Sauvé.

It started out as a series of silkscreens that I was doing,” said Sauvé. “There was a number of different images, but the man with the hat … he became the image that would resonate with people the most, and with myself. It just kept coming up and coming up. As I was transforming this from prints into three-dimensional steel forms, it just kind of took hold.”

According toSauvé, he started this project on New York City’sHigh Line, the former elevated railroad that has become a park and art space in Manhattan. He got an opportunity to launch the orange man as the first public art project on the High Line, and he got a student group involved from a local school where arts funding was cut.

It was one of the children who planted the seed that started the whole project.

“One of the kids said to me, 'You know, these would be great up on the rooftops,'” said Sauvé. “And so the idea was really born out of that and eventually it came to Detroit and someone said 'Hey, I have a rooftop … my uncle owns a bar, my mom knows how to make costumes. Let’s put on a show.'”

The works have been on display for nearly four years with little to no promotion. Over time, slowly but surely, more and more people have discovered Sauvé's work.

“It’s better when people find it on [their] own,” said Sauvé. “The idea also is to highlight the architecture of the city. The buildings were chosen specifically for their relationship to me, as well as their relationship to the city, whether it’s a non-profit or someone I’ve worked with in the past or just because the building was of interest to me and [significant] in the history of Detroit.”

Listen to the full interview below to hear more about the influences, the role children have played in the project, and what Sauvé's ultimate goals are for the Man In the City.Listen to our interview with artist John Sauvé. 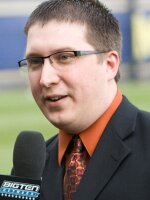 Josh Hakala
Josh Hakala, a lifelong Michigander (East Lansing & Edwardsburg), comes to Michigan Radio after nearly two decades of working in a variety of fields within broadcasting and digital media. Most recently, he worked for Advance Digital where he managed newspaper websites from across the country, including MLive.com. While his resume is filled with sports broadcasting experience (Big Ten Network, 97.1FM The Ticket, 610AM WIP etc.), radio reporting (90.1FM WRTI) and odd jobs (Editor for the FIFA video game series for EA Sports), he brings a passion for news and storytelling to the Stateside staff.
See stories by Josh Hakala
Classical IPR
Your home for classical music from northern Michigan and Interlochen Center for the Arts
Classical IPR home
Corporate Support
Your business can support public radio in northern Michigan
Local news coverage, straight to your inbox
Get IPR's weekly newsletter every Friday morning.
SIGN UP
IPR Merch Store
Show your love for IPR with tees, masks and more!