I wear two wedding rings—a fat gold band on my left hand and a slim silver one on my right. The silver ring has a pattern of double hearts and belonged to my Great Aunt Ruth, who was my grandmother’s sister and the happiest member of our family.

Ruth didn’t seem to judge anyone, including herself. I can still hear her robust laugh.

At age 33 she married a wealthy older man and their wedding date is engraved inside the ring I wear—June 24, 1919. They traveled to Alaska on their honeymoon, and I have a photograph of Ruth waving from a rope bridge above the Yukon River.

Ruth and Frederick had one child, a daughter who fell off her bike at age eight and suffered a concussion. “The nurse told us we could let her go to sleep,” Ruth said, “but she never woke up.” The following year Ruth and Frederick lost everything in the Depression.

After Frederick died from Parkinson’s disease, Ruth lived alone. At age 73, she remarried, traveled the world, and lived to celebrate her twentieth wedding anniversary. It was as if she believed in her own worth, her right to happiness, regardless.

When Ruth died, I was a young woman—too young to know much about suffering or seek her wisdom about how to face loss and embrace life.

She left me only her example. And her ring. 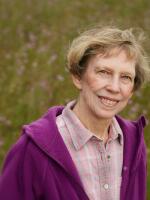