The breach of a dam south of Traverse City over the weekend gave residents along the Boardman River a scare.

Officials declared a state of emergency for several hours and issued evacuation orders. Floodwaters damaged a number of homes in low spots along the river but there were no injuries.

Containment Fails
The Boardman River is supposed to gradually return to a natural flow as three dams are removed. But Saturday morning, as contractors got ready to slowly lower the pond behind Brown Bridge Dam, their containment system gave way.

A surge of water tore downstream uprooting trees and carrying sand and sediment that had built up behind the dam for nearly 100 years.

“It’s just very tragic. I don’t think it will ever look the same as it did,” says Mary Halladay. Her family has owned property along that stretch of river for almost as long as the dam has been there.

Her grandfather invented a popular trout fishing lure called the Adam’s fly. “I know a lot of fly fishermen and they’re outraged right now,” Halladay says. “I mean they think their fishing is gone forever.”

Not all trout fishermen are saying that.

The Damage Done
For a while the once clear stream will look more like coffee. And silt that clogs fish gills and smothers their spawning beds and chokes out aquatic insect life undoubtedly will do some damage.

And as it turns out not as much sediment went downstream from the pond as might have otherwise. “We dredged out 100,000 cubic yards of sediment prior to this final drawdown so thank god we did,” says Steve Largent, part of the team in charge of dam removal on the Boardman.

The engineers still don’t know for sure why their system failed. Three independent companies will investigate what happened in the coming days. And dam safety inspectors from the state are beginning their inquiry.

By Sunday morning, crews were out on the river pulling out whole trees and other debris caught in culverts.

People Upset
Mary Gauthier, a lifelong Traverse City resident, is among a small group watching. She says she kayaks the river frequently. And over the years she’s seen a lot of houses and cabins grow up right in the floodplain. “And they never thought something was going to happen like this. Thank god nobody got hurt,” she says.

But Gauthier also isn’t a fan of taking down two more dams  on the Boardman, as planned, if this is an example of the damage to be done.

So does Mike Crouch. He and his neighbors manned a small private bridge to their property half the night to keep debris from knocking it out.

Crouch doesn’t believe all the talk by dam removers about making the river more natural. “Natural would be to let trees fall down and stay in the river and never clean them out. That would be natural,” Crouch says. “I’m totally against it. They’ve destroyed the river as far as I’m concerned.”

Bigger Disaster Averted
Biologist Nate Winkler says the incident or accident at Brown Bridge was unfortunate and upsetting. But he says if the dams stayed in place there would always be the chance of a catastrophic failure that would be much worse than what happened over the weekend. “We’re trying to undo a great harm that was done to the river more than 90 years ago,” Winkler says.

And he says it was quick action by heavy equipment operators that avoided more destruction. He points out that when the breach happened a couple of them put themselves on the line. They stayed on the dam as the water surged, picking up boulders and concrete chunks and dropping them into the hole.

“That’s something that people who aren’t here don’t realize and can point fingers,” Winkler says. “But unless you’re here to see what happened you don’t know the whole story.”

The dam removal team expects they’ll take some hits from naysayers who’ve always been against the project. But they also expect it will continue to move ahead. 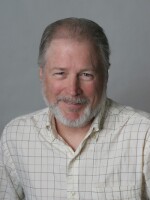 Bob Allen
Bob Allen reports on a variety of issues that reflect the changes and challenges that affect northern Michigan including rapid population growth in a region of unsurpassed natural beauty. Bob has often noted that he is proud inform and enrich lives in the local community by presenting an array of fine programming through Interlochen Public Radio.
See stories by Bob Allen
IPR Shows & Podcasts