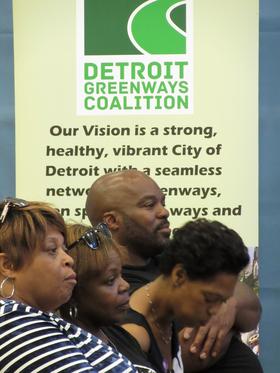 More often, it's flooding in areas not known for a lot of flooding in the past. That happened in Detroit in 2014. It caught everyone by surprise as interstates and neighborhoods were suddenly under water.

Pat Bosch lives in the Outer Drive Conner neighborhood in northeast Detroit. She says the natural floodplains have sometimes disappeared.

“When we researched the history of our neighborhood, we were shocked that once Conner Creek flowed as a natural body of water through the whole northeast side. But, slowly the city encroached on it and ultimately made it into the city sewer system. Mother Nature always wins. So, how do we mitigate it now?”

Organizations have been collaborating to see where things such as rain gardens can be incorporated along existing greenways and trails.

Khalil Ligon is a community sustainability planner with the Alliance for the Great Lakes. At a meeting this week with the Conner Creek area of northeast Detroit, she explained how they can slow down the stormwater and let it soak into the ground rather than flood the streets. 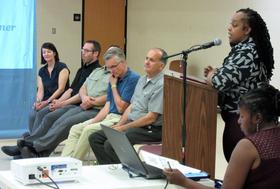 “We saw this opportunity to look at these greenway trails that course through these neighborhoods that have been experiencing a lot of flooding to say hey, what it we looked at green infrastructure so that we could start to potentially alleviate some of those flooding concerns, but also have an opportunity to address things like blight and beautification which are also very important to residents as well,” Ligon said.

Ligon's group is working with the Detroit Greenways Coalition one neighborhood at a time. The network of greenways adds up.

“So, if you can imagine our trail is eight-and-a-half miles long, from Eight Mile to the river. If that entire trail was a sponge, that could alleviate some of the flooding issues that we know about today.”

But there’s confusion about what’s being proposed. Making things look pretty is good, but a bioswale sounds like it could be nothing more than a ditch full of weeds. It’s actually more than that. It’s a depression filled with natural plants and flowers that captures storm water runoff and helps it soak into the ground. 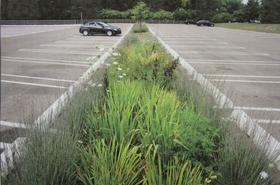 Explaining things like that to residents is one part of this effort. They’re also asking neighbors to help design the green infrastructure.

"Our idea was to reach out to communities, use them to help us build a three-dimensional computer representation of the landscape that would help them make decisions about green infrastructure," said Victoria Campbell-Arvai with the University of Michigan School for Environment and Sustainability. "In the past, design has been very top-down. What we wanted to do is use this for an opportunity to create more of a bottom up process."

I ask Campbell-Avari's colleague, Mark Lindquist, whether any themes have emerged as they've talked to residents.

"Initially we thought it was going to be primarily driven by flooding and storm water issues" said Lindquist, "but a lot of it is about recreation, places for people, places to grow food, places to congregate." 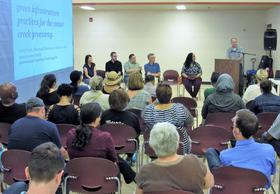 Rain gardens and plantings are just part of the plan. Hard surface areas along the greenways can be built –not with concrete – but with permeable material that will help soak up the rain.

If all the trails and greenways are transformed to help reduce flooding, it will help, but it still won’t be enough. Khalil Ligon says that’s why they need to get the big construction projects to include green infrastructure.

“Since those are immediate opportunities that’s kind of whom we’re targeting. So, the departments of transportation and the Great Lakes Water Authority, those who are going to be doing significant infrastructure projects, asking them to incorporate some of these ideas and practices into their work.”

The argument is that green infrastructure will cost a lot less than flood damage. It also will help prevent the pollution that happens when sewer systems overflow into the Detroit River and eventually the Great Lakes.