ShareTweetEmail
Listen
Listening...
/
You can hear Peter's story above.

A treatment that kills zebra and quagga mussels could soon be available for use in lakes and rivers. It’s very effective and safe.

But it is not likely to undo much of the ecological damage done to Michigan waters by invasive mussels.

It could be good news, though, if you’re a clam. 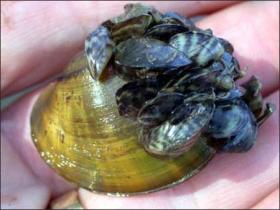 Quagga and zebra mussels are native to Eastern Europe and have been a disaster in the Great Lakes.

They crowd out other aquatic organisms, and some researchers blame them for the record low numbers of fish seen in Lake Michigan in recent years.

When Sarah Litch first heard about a type of bacteria that kills these exotic mussels, she thought what you might be thinking: Maybe we could fight back and clean up Lake Michigan.

She got in touch with the man who discovered the bacterium, Dan Molloy.

Invasive mussels have also been ruining Glen Lake in Leelanau County, to a lesser extent. Litch lives on Glen Lake and is very active in the lake association. She has been following the progress of this discovery for more than a decade.

The bacterium is manufactured now in a product called Zequanox. Litch says it is a common type of bacteria; it’s in the soil all around us. But when zebra or quagga mussels filter it from the water, they die.

"It causes blood clots in its digestive system. So that’s how it kills," says Litch.

Field tests have found Zequanox to be more than 90% effective, although the tests have been in limited areas.

Not a magical solution, but maybe good in small doses

Right now, it can be used only on water intake pipes that fill up with mussels. But the company that makes the treatment expects to have approval soon for open-water use.

Even on a lake as small as Little Glen, Zequanox will never get rid of the invasive mussels entirely.

Heath Phillips is with Marrone Bio Innovations, the company that produces it.

"Using a large amount of product, or enough product to be able to completely eradicate a body of water, would be so large that economically it’s probably not going to be feasible," he says.

There are more realistic goals, however, and one that interests the Glen Lake Association.

"They cling on with their little byssal threads and then the clams cannot move and cannot feed, cannot reproduce, cannot filter," says Litch.

And in the end, the zebra mussels kill the clams.

What we call clams are technically mussels.

There are dozens of native mussel species in the Great Lakes region that are disappearing.

Rob Karner is the Glen Lake Association biologist. He knows of two that were once common in the lake: giant floaters and fingernail clams. Karner used to take science students to a spot on Little Glen known as Wickham’s Point to collect them.

"It wasn’t hard to get, you know, 15 to 20 native clams to dissect. When I go and look now, it takes quite a while to find a single clam, a native clam," says Karner.

Nobody has discovered a native clam that is hurt by Zequanox. So the lake association might use it to knock down zebra mussels in a few select locations.

That should allow clams to recover in these sanctuaries. Wickham’s Point in Glen Lake might be one of those spots.

First, the product will need Environmental Protection Agency approval. Marrone Bio thinks that could come as early as this spring.

A study funded by the Great Lakes Fishery Commission says there is likely a landlocked population of sea lamprey in northern Michigan.

Scientists with the U.S. Geological Survey have found evidence of a self-sustaining population in two lakes, Burt and Mullet, above the Cheboygan River lock-and-dam.

This would be an expansion of the invasive predator’s reach.

Marc Gaden, spokesman for the Great Lakes Fishery Commission, says there are several things at stake.

Water drips through my kitchen sink all day every day, like many others in the region, to keep my underground pipes from freezing.

For a month or so, we've let it flow at the width of a pencil lead. Some run water advisories are in effect until mid-April.

So just how much water is going through there?

I stuck a plastic gallon milk jug under the flow and timed it. I calculated that I’m running about 90 gallons a day. That's about two bathtubs of water run right down the drain daily.

Listen
Listening...
/
An interview with Michael Hawthorne, a reporter with The Chicago Tribune.

An oil spill from a BP refinery in Whiting, Ind., this week has raised new worries about the stepped-up processing of Canadian tar sands – and threats to Lake Michigan.

Considering that seven million people in Chicagoland depend on Lake Michigan for drinking water, even a little spill might be cause for concern.

Exactly what was spilled? How far did it spread? And has BP contained the leak?

We're joined now by Michael Hawthorne, a reporter with The Chicago Tribune.

Listen to the full interview above.