“When I first go on stage I’m nervous, but as I go I feel exhilarated. I feel like I am the only one out there and that’s amazing.”

Keta says she's making a lot of changes in her life. (We are using only the first names of the inmates in this article). She's serving a roughly 20 year sentence for a crime she commiteed nearly 10 years ago. She's one of the actors with Shakespeare in Prison, a program of the Detroit Public Theater. It's her first year participating in the program and tells me she's really enjoying it. 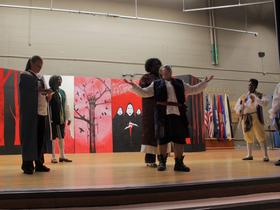 "I thought I wasn’t going to understand some of the language that was going, but once we started getting into it was amazing. I feel like I’m right at home."

The program takes place at Women’s Huron Valley Correctional Facility in Washtenaw County. It's the only women's prison in the state. Frannie Shepherd-Bates, founder and director of Shakespeare in Prison hopes that the women will be empowered as a result of the work that they do in the program.

"...the goal is not so much to train actors or to put on the highest quality artistic performance as we can but instead to learn new things about ourselves and new ways of moving through the world in a really positive way, connecting to other people, learning about ourselves and our paths in order to move forward.”

This week, the women at Huron Valley Correctional will perform Macbeth in front of the prison community.

Listen
Listening...
/
Listen to the women describing the Shakepeare in Prison program for themselves.

As one of the main characters, Sarah has a bigger role this year than she had last year and says there's a lot to learn the play. 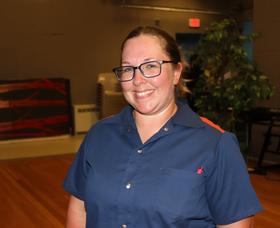 “Macbeth is a character that starts out as this good guy. And he kind of just loses himself along the way I think and he becomes this person that you don’t even recognize in the end. And I really feel like, it kind of mimics a life of a person that is a felon. I feel like a lot of people are inherently good and something happens in their life or something influences them and they make bad choices and sometimes those choices are horrible. And it’s hard to turn back from it and then you end up here."

Warden Shawn Brewer also thinks the program has value to the inmates.

"I think it’s a great program. It certainly serves to augment the other services that we have and reinforces their creativity, which ultimately lends for them to have a successful transition."

Twenty-six year old Julia plays the role of two doctors and a wounded captain in Macbeth. She's been in prison for almost 5 years and should be going home at the end of the year.

"I’ve grown up reading Shakespeare so it’s really cool to see if come to life... So I’ve actually been having a lot of fun memorizing. I wanted to be an actress as a kid and it’s been a lot of fun to kind of see what it’s like to actually get into a role.” 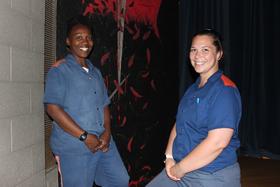 For most of the women, the prison program provides a chance to challenge themselves in new and creative ways.