Without EPA support, Lake Erie could be "poster child of pollution" once again

It's an especially precarious time for Lake Erie's future.

That's according to Jeffrey Reutter​, an aquatic biologist and limnologist from Ohio State University who has studied the lake since 1971.

It's his belief that if we lose the EPA, we lose Lake Erie.

And while the Trump administration isn't proposing a complete eradication of the department, The Washington Post this week reports that the White House is proposing to cut staff at the EPA by a fifth, and to cut its budget from $8.2 billion a year to $6.1 billion. 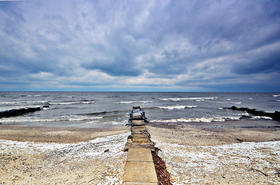 Reutter said Lake Erie caught fire in 1969, becoming a “poster child for pollution.” After that, multiple agencies from the U.S. and Canadian governments, including state agencies from Michigan and Ohio, came together to clean the lake. During the early 1970s, a wave of environmental reforms brought “huge improvement” to the lake’s health.

Within a few years of environmental work, Lake Erie went from being a “dead lake” to being the “walleye capital of the world,” Reutter said, referring to a freshwater fish that's popular among anglers. This revitalization drove tourism and small business growth to the eight Ohio counties that border Lake Erie.

Now, Reutter worries, the lake is in danger of being right back where it was before the 1970s. Because Lake Erie is shallow and warm, it is uniquely vulnerable to algae blooms, which threaten fish and other wildlife. It needs additional protection to stay healthy, Reutter said.

“Lake Erie won’t manage itself," he said. "Without a strong EPA, Lake Erie is likely to deteriorate and go back to the conditions that we had in the 1970s.”

Hear more from Jeffrey Reutter, including why he believes the fight to sustain environmental protections could be the “third battle of Lake Erie,” in our interview above.