Wind generation picking up in Michigan despite some local opposition 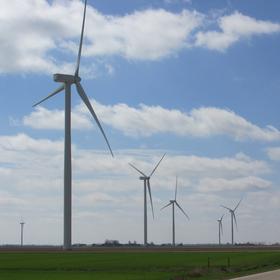 Wind energy became popular because it can reduce the need for polluting coal and gas generated electricity. But, things are shifting now.

“Obviously, there are other benefits associated with wind and solar energy. It is environmentally benign. It doesn’t produce any carbon dioxide, no particulates, no acid gases, no heavy metals that contaminate the Great Lakes. So, even without monetizing those negative aspects of fossil fuel generated energy, wind and solar is controlling the market now,” he added.

Polls show people want green energy. A lot of Fortune 500 companies do too. The big power companies are taking notice.

“What we have is a commitment now, a publicly announced commitment by our two principal utilities that generate 90 percent of the energy used in Michigan, Consumers Power and DTE, to build in the next few decades over 11 thousand megawatts – that’s a lot of renewable energy,” Pruss said.

That’s enough solar and wind energy to power somewhere between two million and seven million homes, depending on how you calculate it.

But, there are stumbling blocks, especially when it comes to building those large wind turbines. A lot of people don't want them built near their homes.

People say the spinning blades cause flickering shadows that cause anxiety and epileptic seizures. They say the low frequency noise can be horrible for people sensitive to noises. People complain about the birds and bats that fly into the spinning blades and die. They also frequently complain the utilities are heavy-handed in siting the wind turbines.

Pruss says the turbine manufacturers and the energy companies are working to solve all of those problems.

“There’s still tremendous support, majority support, bipartisan support for clean energy, for wind and solar projects, even utility scale projects. But, the opposition is more vocal, they are more motivated to act. And, they are active within township governments, within county governments with their opposition to wind and solar projects,” he said.

Recently, Michigan’s year-over-year increase in wind generation has been among the highest in the nation, so it’s growing. But, most of Michigan’s neighbors are producing a lot more. Wind is just a little more than five percent of electric generation in Michigan. Compare that to Iowa which gets 38 percent of its power from wind. (See Michigan renewable energy data here.)

The biggest hurdle for Michigan might be approving offshore wind turbines. Off the shore of Lake Michigan is some of the best and most constant wind. Many homeowners along the beaches don’t want anything marring the view of the lakes.

“I personally think it’s inevitable. We will see wind turbines in the lakes. When we see that, they will probably be far out in the lakes and really not even visible from the shoreline,” Pruss said.