A personal tragedy can open your eyes to things that had previously been out of sight and out of mind.

For Abby Dart, it was her husband’s suicide in 2004. That loss opened her eyes to the stigma we’ve built up around mental health problems. She believes that stigma killed her husband Steve. 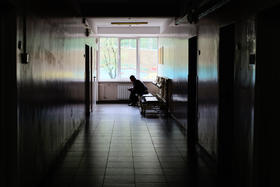 As Dart revealed in her recent Detroit News column, she believes we can and must tear down mental health stigma.

“I think what happened was many, many years ago – I call it sort of the ‘dark ages’ – people were very frightened of anything dealing with the brain and mental health and mental illness,” she said.

That led society to establish separate codes – one for physical health and one for mental health, she said.

For instance, Dart said if a person in a suicidal state is voluntarily hospitalized, but not committed, that person can walk out.

“You can leave,” she said. “You would never do that for somebody that was hospitalized with a heart attack.”

Dart said these different standards and the associated stigma of mental illness keeps too many people from receiving the help they need.

In fact, she said she believes it wasn't the mental disease that killed her husband. It was the stigma.

“He was a successful, Harvard-educated attorney and, even with all that education, he was reluctant to seek treatment early,” she said. “He thought maybe a colleague or his employer might find out about it.”

That same thing happens to too many people today, she said.

“People think they can handle it,” she said, “when you wouldn’t think you could handle heart disease or high blood pressure.”

That, she said, is the mindset that needs to change.

For the full interview, including how Dart thinks schools can help knock down mental health stigma, listen above.