Why we could have more toxic blooms in our warming world

There’s a green bloom of cyanobacteria on Lake Erie again. People who run water utilities and scientists are watching the bloom because the cyanobacteria can produce toxins called microcystins that are dangerous for people and pets. It's what made Toledo’s drinking water unsafe to drink in 2014.

“Latest reports show that most of it’s either on the west coast of Lake Erie, up along Michigan, or moving its way through the center part of the lake,” he says.

Winslow says the size of the bloom depends on the amount of rain that flows down the Maumee River in Ohio between March and July.

“We were anticipating a bloom somewhere between a seven and an eight on a scale of 10. I would say we have not reached a biomass or a bloom of that size yet, and that makes sense given the fact that temperatures have been fairly cool over the last couple weeks and we’ve had some pretty windy days,” he says.

He says the blooms need somewhat calm waters and hotter days to set up.

But he says cities like Toledo that have water intake pipes in the lake are staying on alert. That’s because the blooms can grow through August and September, and even into October.

Steve Chapra is the lead author of a new study in the journal Environmental Science & Technology. He’s a professor and the Berger Chair of civil and environmental engineering in the School of Engineering at Tufts University.

“I like to think of them as the cockroaches of the water. Cyanobacteria are the oldest photosynthetic organisms on the planet. So they’re responsible for why we have oxygen, but they have an over three billion year evolutionary history," he says. 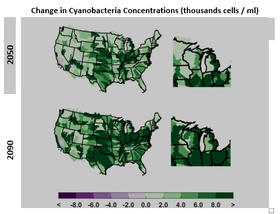 "As such, they’ve been subjected to cold temperatures, and the warmest that the planet has ever seen and they’ve adapted to it. So they’re very resilient organisms. And in particular, compared to other phytoplankton, they have the tolerance for the highest temperatures," says Chapra.

He says his team's research shows cyanobacterial blooms are likely to increase significantly in our warming climate. But some regions, such as the Great Lakes, could see more blooms than other regions.

He notes that climate change is already bringing more intense rainstorms, and that can affect the amount of nutrients that wash into lakes, such as Lake Erie.

"You’re going to wind up having more nutrients wash into the system, and in that system, the temperature is making more cyanobacteria; well, the nutrients are compounding that," he says.

You can listen above to hear more from Steve Chapra.