What Michigan can do to reduce the state's prison population 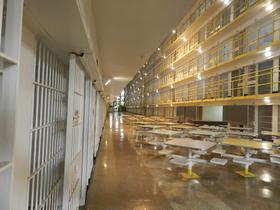 There's no denying that state spending and budgets are stretched tight, and it's forcing a fresh look at the soaring costs of our prisons.

What are we really getting for the $2 billion we spend per year on corrections? And how can we trim that corrections bill?

A nonpartisan, non-profit group called the Citizens Alliance for Prisons and Public Spending, or CAPPS, offers strategies for cutting our prison population by 10,000 inmates. They say this is possible without impacting public safety.

These reforms could save the state $250 million a year, according to Barbara Levine of CAPPS.

Currently our prison population is over 43,000 and Levine says this high rate came through the tough sentencing strategies of the 70s, 80s and 90s. She says the goal was to keep people in prison for as long as possible and they brought tougher parole policies with them.

"Michigan's average prisoner length of stay, the amount of time prisoners serve in the state, is substantially longer than the national average," says Levine.

And she says there is no proof that Michigan is any safer than other states because of this.

CAPPS has a number of suggestions for reducing the current population and decreasing the number of people who have to serve time.

Levine advocates for addressing the cause of people's behavior through higher participation in and availability of substance abuse and mental health programs.

According to Levine, Michigan is also only one of nine states where the age of criminal responsibility is under 18, and she says the number of 17 year olds the state pays to keep in prison can add up.

Recently, a bill cleared the House Criminal Justice Committee that would enact presumptive parole. Levine is a proponent of this new system, which would grant prisoners parole once they've served their minimum sentence if they fall into a low risk category of re-offending according to the Department of Corrections parole guidelines.

For those who question the safety of releasing prisoners, Levine says, "Nothing in any of our proposals will prevent a judge from giving a long sentence to someone who has committed a serious crime. Nothing would require the parole board to release somebody where there's evidence that they're currently a risk. Nothing would effect the rights of victims to present their concerns at sentencing or during the parole process."

"We have to stop and think who we're locking up and why and look at their actual risk as opposed to the rhetoric," she says.