Ontario Power Generation wants to bury some of its nuclear waste on the site in Kincardine, Ontario. All of the company’s low and intermediate level waste would be buried there forever, far underground.

To be clear – no spent fuel would be buried at this site.

A Joint Review Panel appointed by the Canadian government is expected to give its recommendation on the waste site to the federal environment minister, Leona Aglukkaq, by tomorrow. Then, she has 120 days to approve or deny the construction of the repository.

“As a nuclear operator, it’s responsible thing to do, to not push this problem down the road, to deal with it today,” says Keto.

He says right now, all of OPG’s low and intermediate level waste is stored above ground on the Bruce nuclear site. But he says they need permanent storage for the waste, and that’s why they want to build a deep geologic repository.

He says the shaft facilities at the surface would be a little more than half a mile away from the shores of Lake Huron. The waste site would be almost a half mile underground.

“This is down very, very deep and in very ancient rock and very well isolated,” he says.

“Some of it is very highly radioactive. You know, the reactor components will be radioactive for upwards of 100,000 years,” he says.

This would be the first time this kind of facility would be built in limestone.

But Keto says they have no doubt the repository would last more than 100,000 years.

“This rock is about four times the strength of concrete. It’s under an immense amount of pressure at that depth, which basically makes this rock impermeable. So there really is no opportunity for the waste contained in this facility to make any contact at all with the surface at any time in the future,” says Keto.

But those assurances aren't calming many people's worries.

This proposal has gone through 33 days of public hearings, and there is major opposition on both sides of the border. 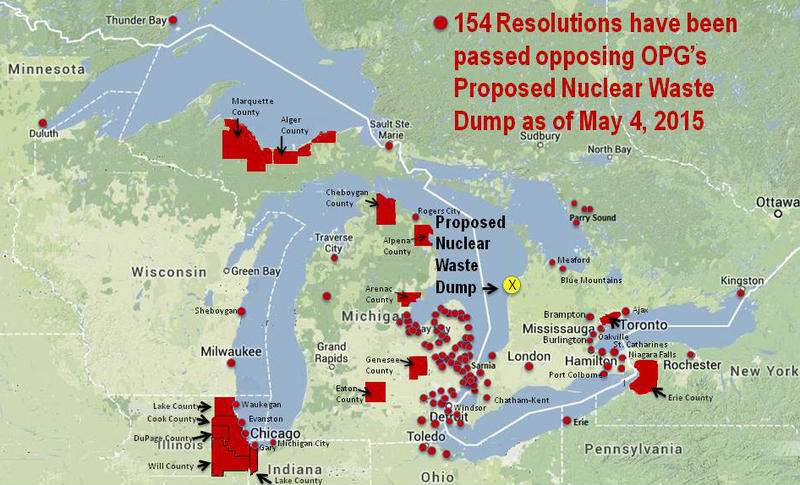 There are resolutions in Congress to block the creation of the waste site.

Toronto, and other cities and towns in Ontario have also passed resolutions. So has Chicago, along with 15 counties in Michigan.

Beverly Fernandez is the spokesperson for the group, Stop the Great Lakes Nuclear Dump.

“We have to question why you would want to place radioactive nuclear waste beside the largest source of drinking water on our planet,” she says.

“Neither OPG nor any scientist or geologist can provide us with a 100,000 year guarantee that this nuclear waste dump will not leak. So why would we take a risk with the Great Lakes when this risk need not be taken?”

If OPG's construction license is approved, it's just the first step.

At the earliest, OPG could have a construction license by the end of this year.

But OPG's Jerry Keto says construction wouldn’t begin until at least 2018, and the company would have to apply for an operating license before they could bury any waste.

“We have made a commitment to the Saugeen Ojibwe Nation that we would not proceed with this repository without their support,” he says.

Right now, OPG does not have their support.

Vernon Roote is the chief of the Saugeen First Nation. He says they still need more information about the possible risks of the waste site.

The Saugeen First Nation is currently in talks with OPG.