The unsolved 1930 murder of a Detroit radio crusader 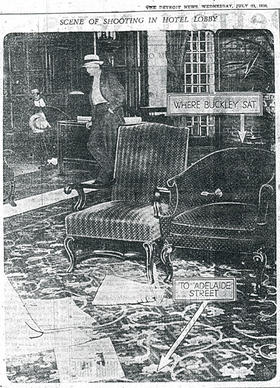 Like something out of a gangster movie, radio personality Jerry Buckley was gunned down in the La Salle Hotel in Detroit 88 years ago this week.

Buckley’s killer was never found, and the mystery of his death involves mobsters, a city mired in violence, and a corrupt mayor who was recalled, in part, because Buckley protested his election on the radio.

Mark Harvey, State Archivist with the Michigan History Center, and Scott Burnstein, author and expert on organized crime in Michigan joined Stateside to talk about what happened.

Buckley was a local celebrity in the city, and people were shocked when he was killed. The public's reaction to his murder was similar to "Mitch Albom being slain, or if Charlie LeDuff was killed" today, explained Burnstein.

Before his death, Buckley was on one side of a tug-of-war between the mayor and Detroit's gangsters. He used his talk show — the highest-rated talk show at the time — to help recall the mayor. It was a decision that may have cost him his life.

To learn more about the events leading up to the untimely death of Jerry Buckley, listen above.

This segment is produced in partnership with the Michigan History Center.