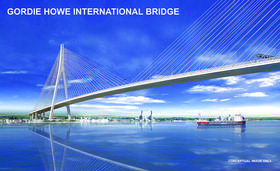 Things appear to be moving ahead for construction on a new bridge between Detroit and Windsor. Last week, a consortium of builders was chosen to construct the Gordie Howe International Bridge.

However, trade tensions between the U.S. and Canada continue to rise, and the Moroun family — owners of the rival Ambassador Bridge — recently ran an oppositional ad on Fox and Friends asking President Trump to stop construction of the bridge.

In a recent article, Chad Livengood of Crain’s Detroit speculated about whether presidential opposition could delay or even ruin plans for the new bridge.

Andy Doctoroff is a special projects adviser to Governor Snyder and Michigan's point person on the Gordie Howe International Bridge.

Doctoroff joined Stateside to discuss trade tensions between the U.S. and Canada, which he called "momentary blips" in the long-term vision of the bridge. He also spoke about the Moroun family’s longstanding opposition to the bridge.

Listen to the full conversation above.