In time of racial tension, U of M stages a contemporary look at slavery

As Timothy Douglas gave his cast some advice before a recent rehearsal, giggles broke out when he mimicked one of the characters. Douglas laughed along with the University of Michigan student actors, who were taking notes from their seats in the campus’s Arthur Miller Theatre.

Soon after, however, he shifted his voice to a more serious register, telling the players to feel out the moment before staging the play’s more comedic lines. 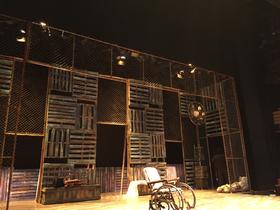 Douglas’s mix of humor and sincerity is mirrored in the play that he’s directing for University of Michigan School of Music, Theatre, and Dance. As Douglas described it, Insurrection: Holding History is “a very complicated journey,” a story that others have called “Roots meets the Wizard of Oz.”

The play centers around Ron Porter (Aaron Huey), a PhD Candidate in “Slave History” at Columbia University, and his 189-year old Great-Great-Great Grandfather TJ (Eddie Williams), a former slave who is mysteriously still alive. Ron is writing a thesis about Nat Turner, the leader of a violent slave rebellion in 1831, but is stuck. TJ, it turns out, was actually there.

Douglas said the play uses humor to bring to light the “dark history” of slavery. For example, when Ron and TJ’s time travel accidentally kills the plantation owner, there is a “'Ding Dong The Witch Is Dead'-type number."

Still, the theatrical sensibility does not sugar-coat the violence of slavery. “Within minutes,” Douglas said, “you’re dealing with a very real confrontation between the maniacal overseer and the slaves while he’s weighing the cotton.”

Douglas has produced Insurrection: Holding History multiple times before. In his experience, the reception of the show can sometimes depend on the demographics of the audience. Some white viewers will hesitate to laugh, which Douglas called a “DNA recognition that we’re still living with this atrocity.” Still, he said, the play “tells a story about family that anyone can relate to.”

Conversations about race are in the public eye right now, which Douglas anticipated will lead to “a more potent response” to this performance. He can already tell that the students of color who make up the majority of the cast of Insurrection: Holding History are benefiting from the “innate, connected, unbridled joy” of acting in a culturally-specific role.

Hear more from director Timothy Douglas, including a clip from the play, above.