Through writing workshops, teens of all backgrounds aim to cut through difference 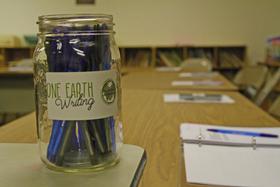 I grew up in a suburb of Detroit and went to school where most of the kids looked like me. During the Jewish holidays, teachers didn't assign work because so many of us were absent. There might have been five or six African-American kids in my high school, and no one wore a hijab in public.

I’ve always been curious about the way other people live. My journey as a journalist and author and writing professor has taken me to find common ground in people different from me. I visited a mosque, attended a candlelight service in a Catholic church in Ireland, and spent a plane ride to Israel having a deep, powerful conversation with a Palestinian man going to see his family. As I developed my writing craft, I continued to seek out stories that showed the similarities in people, the beliefs we share, and the customs we have in common.

I also was drawn to working with young people to develop their love of writing. Early in my career, I created summer writing camps for children, hoping they would learn to love the craft rather than feeling anxious about it as they might during the school year. I loved the process of showing them their own beauty, especially when so much of the world wants children to simply fall in step with what adults want. I believe that we must not squander children’s true voice and passion – and the way they see truth in the world – if we want to create a future of peace.

Over this past year, as I searched for greater purpose in my life, I realized that it had been staring me in the face all along. The synthesis of my experiences and beliefs is a new nonprofit called One Earth Writing.

One Earth Writing brings together youth from different backgrounds for writing workshops where they explore identity, belief and community. As a writer and a teacher of writing, I have seen how workshops can be a portal into understanding. When we sit at a table and share our fears and desires, our hopes and dreams, we connect. Sometimes, we write about those universal truths that we all know – the role of food in making meaning, anger at a parent, fear of not being liked. Emotions connect us, bolster us, give us the confidence to go forward.

We talk about the words used to define ourselves, and decide whether those words work. “Bossy” can become “leader.” “Big mouth” can become “outspoken.” We make the conscious choice to use words that build an identity we can live with, rather than crumble under.

This is a gripping process for everyone involved. Paired with same-age, same-stage peers different from them, youth ask questions, finish each other's stories, listen to the poems and paragraphs that are produced. They learn about themselves in the context of the other.

In addition to One Earth Writing workshops, this fall we will welcome our first class of ambassadors. These are kids who apply for a six-month program to write monthly and co-facilitate some of our workshops with other teens.

This is what it might look like: It’s a cool autumn afternoon with 10 high school students gathered around a table in a former Baptist church-turned-loft. Two are Jewish, one Catholic, two are Muslim, three African-American, one Asian, and one student is an Evangelical Christian. They come together to write their experiences and beliefs, and to explore their identity through words. Later this year, they will sample special foods each kid has prepared to show the rituals of their lives. They will stand before two youth groups brought together to explore their common ground, and will guide other kids in writing about who they are. They will finish the school year with a folder of poems and paragraphs depicting the lives of teens told through separate eyes but similar paths.

They will go on to the next grade, and to college, and beyond, with the understanding that everyone they meet has a story worth listening to, a story about what matters and what doesn’t, about belief and experience and exploration and identity in a world that seems somehow more navigable and familiar than they thought possible. This understanding will help them become leaders.

Yes, there will be instances of tension when teens admit, “I always thought THIS about that community.” But One Earth Writing is an opportunity to break down myths and misconceptions. We will connect over things we all share – food, faith, sports, love, fear. Our ambassadors will be trained to spin tension and conflict into harmony. In fact, we anticipate using our workshops in schools as conflict resolution tools by exploring such preconceptions and breaking them down into realities. This is not the place for “there is only one right way.” It’s the place to understand that all beliefs are personal, which makes them universal.

I believe these workshops, these conversations, these choices to discard the words that weaken us and embrace those that strengthen us, are the first steps toward ending the trend of hatred. When our children start talking and writing together, when they understand who they are, each ripple of their transformation leads to another and eventually, their commonality is so far-reaching, they can't help but have an impact.

There is another dimension I bring to this – a personal one. As the mother of four, two of whom are teens, I know this is a difficult age. My children and others their age are grappling with who they are and what they believe. That is why it’s the perfect time to engage in intensive, meaningful explorations. My kids don't see difference. They just see people.

But in the future, if we don't act quickly, they, too, will join the throngs of people who perpetuate stereotypes, who fear whole communities or religions because they are unfamiliar. It must stop. And we can make it stop by replacing the unknown with the known. To me, One Earth Writing is also about the future of my children – it’s about the future of all of us.

Lynne Golodner is a writer and the founder of One Earth Writing.

The Next Idea is Michigan Radio’s project devoted to new innovations and ideas that will change our state.

Join the conversation in the comments section below, on Twitter or Facebook, or let us know your Next Idea here.

(Subscribe to The Next Idea podcast on iTunes, or with this RSS link.)