Taking another crack at Michigan's infrastructure issues and funding 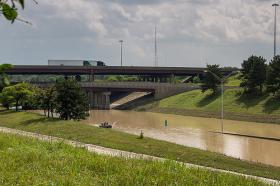 The rainstorm didn't just close freeways and roads and flood basements, it focused attention back on the often-overlooked problems with our transportation infrastructure.

Jeff Cranson is director of communications for the Michigan Department of Transportation.

“It is a good thing now that people realized that we’ve got a number of depressed freeways in Detroit,” says Cranson.

Other than roads and bridges, infrastructure also includes water sewers, drainage, pumping stations and more. And according to Cranson, 58% of the pump houses in Michigan are in poor condition.

“Twenty percent are fair and 22% are good, Cranson says. "The goal is to get them to 90% good or fair. “Until we resolve this funding challenge and decide what we’re going to do as a state and what kind of state we want to be, you’re not going to see that 90% figure achieved.”

However, it seems the dramatic weather event might have given some lawmakers a greater sense of urgency about transportation infrastructure problems and funding.

*Listen to the interview with Jeff Cranson and Jonathan Oosting above.

Governor Rick Snyder says numerous state agencies are helping Detroit and surrounding communities deal with massive floods. He flew back from a trip to the Upper Peninsula to see the flood damage first-hand from a Michigan State Police helicopter.