Enbridge Energy will be required to take steps to safeguard the Great Lakes under a binding agreement with the state of Michigan.

Enbridge and Governor Snyder signed the agreement Monday, which stipulates that the energy company must act immediately to increase environmental protections around Line 5, the controversial pipeline that runs under the Straits of Mackinac. 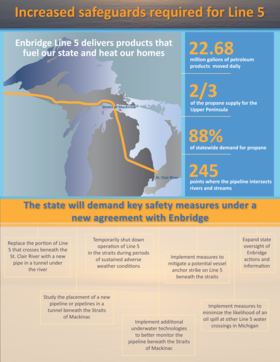 In a statement, the governor said, "business as usual by Enbridge is not acceptable and we are going to ensure the highest level of environmental safety standards are implemented to protect one of Michigan’s most valuable natural resources. The items required in this agreement are good strides forward."

Under the agreement, Enbridge must, among other actions, replace the portion of Line 5 that crosses beneath the St. Clair River with a new pipe in a tunnel under the river, temporarily shut down operation of Line 5 in the Straits during periods of sustained adverse weather conditions, undertake a study on the placement of a new pipeline or the existing dual pipelines in a tunnel beneath the Straits of Mackinac, and implement technologies that improve the safety of Line 5.

The agreement also includes a deadline for each action.

More from the press release:

Today’s agreement does not represent a final decision by the state regarding Line 5, but instead provides a clear schedule on which a decision will either be reached cooperatively with Enbridge or the state will take another path.  In the meantime, the actions mandated in the agreement will improve the information available and improve safety, stewardship, and transparency.

The state's evaluation of Line 5 will continue while the measures are put in place.

The only reason the state can strike this agreement with Enbridge is because the company has a legal contract with the state. The two 20-inch pipelines run under the Straits of Mackinac under the conditions of a 1953 easement. Aside from that contract, the state has no regulatory authority over hazardous liquid pipelines in Michigan. That oversight falls to the federal government.

In full disclosure, Enbridge Energy is a financial supporter of Michigan Radio.