Michigan officials are taking a victory lap in their efforts to reduce the amount of phosphorus flowing from state farms and other sources into Lake Erie.

The officials claim Michigan has nearly met its goal of a 40% reduction in phosphorus from the Detroit River and the River Raisin.

Critics, however, say the self-congratulation is misleading.

Michigan has focused a lot of time, money and resources on phosphorus reduction in Monroe County.  A number of programs, both state-funded and federally-funded, offer incentives to farmers to keep water and nutrients like phosphorus on their land, rather than flowing into the river and lake.

State officials took media on a tour to highlight what's been going on.

The first stop was Bob Vajcner's farm in Monroe County, just a few miles from the River Raisin, which flows into Lake Erie.

Any phosphorus that escapes his land probably ends up in the lake. That is not okay by him.

“The Great Lakes is one of our biggest water resources in the world, and if they ruin it, what are we going to have?” Vajcner asks.

Over the years, Vajcner made a lot of changes to keep phosphorus from migrating away from his farm.  He planted trees for wind breaks to slow soil erosion.  He took some land out of production for buffer strips, to keep water and sediment on the farm.  And he installed an underground irrigation system along with structures that can store excess water until needed.

“And it has worked really good," Vajcner says, "because we can retain a lot of our moisture that comes down, and rainfall and stuff, to stay in the soil rather than draining off right away and carrying nutrients with it."

While the state did take one mandatory measure, a big one, by tightening the permit for the Detroit water treatment plant, state officials chose Vajcner's farm to showcase the power of voluntary actions to cut phosphorus.

State officials say the data is preliminary, but it appears to show a 49% reduction in phosphorus from the River Raisin, and a nearly 40% reduction from the Detroit River.

In June, Michigan, Ohio and Ontario agreed to each reduce their phosphorus levels going into Lake Erie 40% by the year 2025.  Michigan, it appears, has already reached the goal.

Jamie Clover Adams is Director of the Michigan Department of Agriculture. She says the River Raisin data is proof we don't need to regulate farms more.

Environmentalists scoff at the notion.

"I'm just pretty shocked that anyone would say, 'We've got a reduction, we've met our goal, and we're there,’ when in fact, that is not the way the algae in Lake Erie is going to be reduced,” says Sandy Bihn of Lake Erie Waterkeeper.

And she says the level of dissolved phosphorus in Lake Erie has at least doubled in recent years — despite total phosphorus declining in the Detroit River, the River Raisin, and the Maumee River.

"Things are not getting better," says Bihn, "and voluntary measures are not enough.  There is just a huge resistance to do what's needed to get the lake on the road to recovery,” she says.

"The pure voluntary programs are clearly not solving the problem," says Shriberg.  "All you have to do is look at Lake Erie to know that."

Michigan Radio asked state officials to comment on the issue of total phosphorus versus dissolved phosphorus.

We did not receive a reply.

Fingerpointing at others (we're talking about you, Ohio)

The effort to clean up the lake is not Michigan's alone.  Ohio, Ontario, and Indiana are also involved. 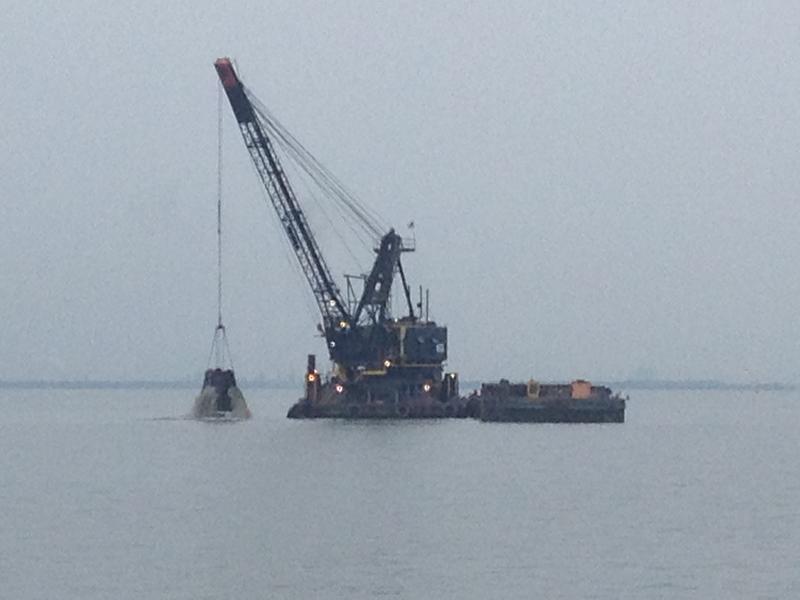 We passed by a dredging machine, its claw lifting huge scoops of sediment to clear the channel near Toledo.

The dredging is conducted by the U.S. Army Corps of Engineers.  Michigan officials say they've asked the Corp to find a place on the land to dump the sediment, which has phosphorus in it, instead of dumping it deeper in the lake.

So far, the Corps has declined to do this, citing cost.

Then we pass the Toledo water intake, which was surrounded by a bloom of toxic cyanobacteria in the summer of 2014.  For two days, Toledo and some Monroe County, Michigan residents were warned not to drink, bathe in, or otherwise use the contaminated water.

Finally, the boat stops at the mouth of the Maumee River.  In the distance, a ship can be seen heading up the river, to stop at one of the salt docks or coal docks in Ohio.

Bill Creal is with the Michigan Department of Environmental Quality.

He says the Maumee is putting huge amounts of phosphorus into the lake, and Michigan has only about 7% of the farmland near the Maumee.

“So we've all got to work on the Maumee River together to come up with a successful solution, because that is the big contributor to the algae blooms,” Creal says.

Creal says Ohio has a lot of heavy lifting to do to reduce phosphorus, in part because the farmland near the Maumee is heavily saturated with phosphorus from years and years of heavy fertilizer applications.

The Ohio Department of Natural Resources did not get back to us for this story.

So are we really there yet?

Not even close, say environmentalists like Shriberg and Bihn.

The summer of 2015 was the second worst on record for cyanobacteria blooms.  Environmentalists say the only solution is for the U.S. Environmental Protection Agency to step in and declare the waters of the western Lake Erie basin "impaired."

That would force each state contributing to the problem to take much more aggressive action, and more closely track the efforts and the results.

But Michigan officials insist voluntary measures such as the ones being utilized on Bob Vajcner's farm are working.  They say there are about 85 additional farms in the basin that are ready to enroll in programs designed to reduce phosphorus levels.

But, this will require patientce and time, say those officials.   After all, the lake didn't get polluted with phosphorus overnight, and it won't be cleaned up overnight, either.