State agency decisions should make it easier for some companies to add solar, co-gen projects 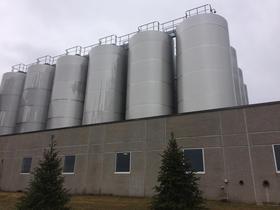 The state's energy regulating agency has issued some decisions that should relieve some of the financial burden on large companies that want to become greener.

Bell's Brewery near Kalamazoo wants to be a sustainable company for generations to come. So being able to produce cleaner energy on site would be a good thing.

Walker Modic is Bell's sustainability manager. He says he hasn't been able to make a business case for any green projects because of something called standby rates.

Standby rates are hefty backup fees that utilities charge for the times a company's own source of power is not available for some reason.

One applies to co-generation plants. These plants use natural gas very efficiently to produce both electricity and heat.

The commission says DTE Energy and Consumers Energy have been charging owners of co-gen plants too much in standby rates.

Douglas Jester is with 5 Lakes Energy, a consulting firm that works on clean energy issues. Jester says the reduction in the rate is modest. So it isn't going to make all sorts of companies go, "wow, let's build a co-generation plant now."

But Jester says the Commission is hinting it could reduce the rates for co-gen plants much more in the future.

"And if that happened I think we would see people doing it because of the fuel efficiency savings," says Jester.

When it comes to solar energy, the Commission's decision may make it suddenly affordable for a company to put in a big solar array.

"Removing standby charges should cause some of those facilities to be built," he says.

Walker Modic of Bell's Brewery says he hasn't had a chance yet to crunch the new numbers.

"I'm optimistic, I am only just getting my arms around that decision from the commission, but yes, I'm definitely optimistic," he says.

So solar panels on the Bell's factory roof, maybe even a co-generation plant on the grounds, that could be in the company's near and mid-term future.

Now, these kinds of projects are very expensive. So the Commission's decisions will only help big companies with big budgets. Many small companies and homeowners can't afford the upfront cost of a green energy system like solar or geothermal.

They have to rely on their utility for their energy.

But there's good news on that front as well.

Just last week, DTE Energy and Consumers Energy promised to increase their use of renewable energy to 25% by the year 2030, and to boost energy efficiency by 25% as well.